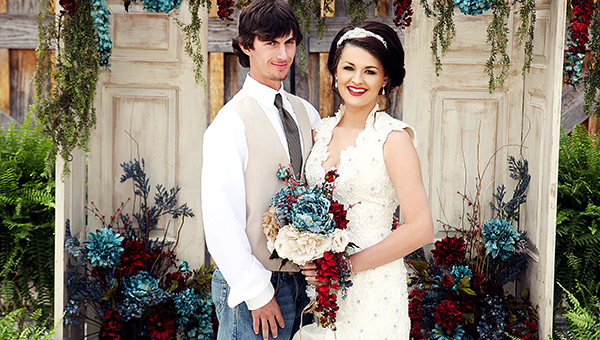 Caroline Alana “Ali” Wallace and Colson Keith “Cole” Lambert were united in marriage on Oct. 17, 2015 at The Jackson Place.

The bride is the daughter of Alan and Missy Wallace, of Bogue Chitto.

The groom is the son of Clancey Laird Lambert and Ron and Kristy Lambert, of Brookhaven.

The rustic barn backdrop was decorated with grapevine wreaths and burlap ribbon. The antique door and ladder arch was adorned with swags of greenery, claret and vintage blue flowers. Ferns were also used throughout the ceremony.

The bride arrived in a 1934 white Ford Coupe driven by her father. She wore a Demetrios Queen Anne neckline gown with pearl iridescent and sequin beadwork over Chantilly lace with a form-fitting bodice, drop-waist, ruching bottom and chapel train. In her hair she wore a silver and clear rhinestone-beaded headband that was a gift from her mother. She carried a bouquet of claret, vintage blue, ivory, burlap, hydrangeas, wisteria and peonies. Her bouquet also held a ring and brooch in memory of her grandmother Norma Hart.

Serving as matron of honor was Kelli Lofton, cousin of the bride. Mallory Allen served as maid of honor. Bridesmaids were Colby Kirkland, Jessica Dixon and Shelby Godbolt.

Flower girl was Ava Kate Lofton, cousin of the bride.

The attendants wore strapless chiffon dresses that were claret in color and boots. They also carried bouquets matching the bride. The flower girl wore an Isabella and Chloe dress of ivory lace.

Ring bearer was Mason Roberts, cousin of the groom.

Following the ceremony, a reception was held at Jackson Place. It was decorated with ferns, mason jars atop stumps with claret, vintage blue and burlap flowers.

The bride’s table was a Victorian distressed table surrounded by antique distressed doors with embellishments special to the bride. The cake was a four-tiered round stack with a rosette tier, a tier with imprintered diamond pattern with candy pearls and a smooth butter cream tier with a “L” initial in flavors of chocolate, red velvet and traditional wedding cake.

The groom’s table was created with antique doors and whiskey barrels and decorated with the grooms ropes and boots. It held a 3-D image of a bull. The bull was created with strawberry cake, rice crispy treats and fondant.

The reception was catered by Mitchell’s Catering and Events. The bride and groom danced the night away, and fun was had by all as entertainment was provided by John Lambert, cousin of the groom, along with his band Ghosttown.

After a honeymoon in Gatlinburg, Tennessee, the couple resides in Bogue Chitto.