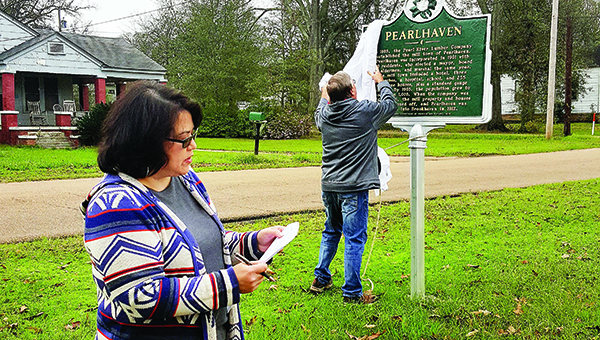 Photo by Josh Rich / Tammie Brewer (left) reads wording from the Pearlhaven Historical Marker to the crowd while her husband, Dennis, removes the sign’s covering Wednesday morning. The sign reads, “In 1899, the Pearl River Lumber Company established the mill town of Pearlhaven. Pearlhaven was incorporated in 1901 with 310 residents, who elected a mayor, board of aldermen, and marshal the same year. The mill town included a hotel, three churches, a hospital, school and 235 employee houses, plus a standard gauge railroad. By 1903, the population grew to more than 1,000. When the company was sold in 1905, the mill property and houses were auctioned off, and Pearlhaven was annexed into Brookhaven in 1912.”