LCSD swears in new board member 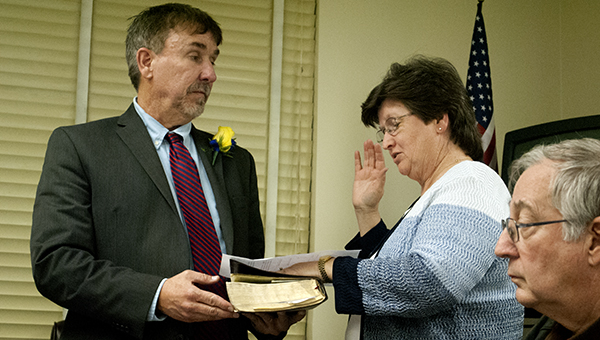 Diane Gill (right) makes her oath as she joins the LCSD board of trustees.

With the beginning of a new year, the Lincoln County School District on Monday welcomed its newest member, Diane Gill, who represents the West Lincoln community.

Gill and returning member Ricky Welch, who represents the Bogue Chitto community, were sworn into their new terms at the school board regular meeting Monday night. Both promised to uphold the Constitution of Mississippi and to serve with the children’s needs in mind. Both are beginning a five-year term in their positions.

The board also elected its officers for 2016: Johnny Hart as board president, Kay Coon as vice president and Ricky Welch as secretary. 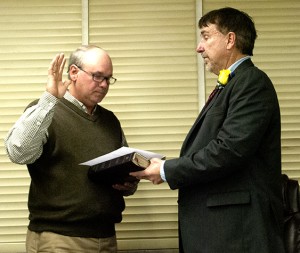 Ricky Welch (left) renews his oath to serve the children of Lincoln County while Superintendent Mickey Myers presides over the proceedings.

The meeting was also the first for Superintendent Mickey Myers, who was sworn in earlier in the day.

With a new superintendent came a number of motions related to necessary changes. They were as follows:

• The board approved to appoint Garrett Sartin as interim principal for the remainder of the 2015-2016 school year at Bogue Chitto. Sartin will also act as purchasing agent for Bogue Chitto for the school year.

• The board approved to hire Tony Davis as assistant principal at Bogue Chitto for the remainder of the school year. Davis will also serve as a teacher and baseball coach.

• The board approved to remove former superintendent Terry Brister as authorized signature on all district-operated bank accounts and to add Myers in his place. Myers will also act as the purchasing agent for district-issued purchase orders.

• The board approved to remove Myers as authorized signature on the Bogue Chitto Activity Fund bank account and to add Sartin in his place.

Other board business included:

• The board approved to allow a funeral of a former student to be held at the Loyd Star gym Saturday at 2 p.m.

• The board approved to hire Kia Porter as elementary assistant at Bogue Chitto.

• The board approved the removal of Gill and Hannah Mason from West Lincoln’s substitute teacher list.