No longer on the back burner 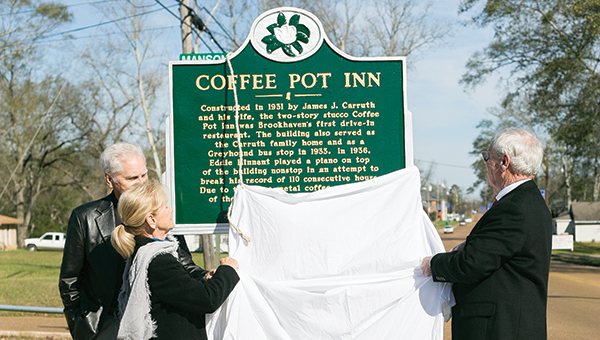 Photo by Kaitlin Mullins
From left, Paul Ott, Lu Becker and Ed Carruth unveil the historical marker for the Coffee Pot Inn on Wednesday. Becker and Carruth are the grandchildren of the Carruths who founded the inn and restaurant, and Ott is their cousin.

“The Coffee Pot has become one of those iconic landmarks when giving directions. If you’re from this area, then you know where the Coffee Pot is located.”

Local history enthusiast Tammie Brewer was describing one of Brookhaven’s historic jewels that has long been a popular tool in giving directions. The landmark finally had its day in the spotlight when its historical marker was unveiled at the site on Wednesday.

Constructed in 1931 by James J. Carruth and his wife, the two-story stucco Coffee Pot Inn was Brookhaven’s first drive-in restaurant, the marker reads. The building also served as the Carruth family home and as a Greyhound bus stop in 1933. In 1936, Eddie Hinnant played a piano on top of the building nonstop in an attempt to break his record of 110 consecutive hours. Due to the large metal coffee pot on top of the building, the Coffee Pot Inn is considered a local landmark. 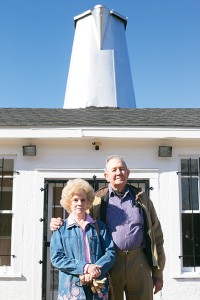 Photo by Kaitlin Mullins / Agnes and Buck Ratliff stand before the Coffee Pot Inn during its historical marker unveiling on Wednesday. Buck Ratliff’s father owned Ratliff Sheet Metal Works and is responsible for the famous feature.

The statements on the historical marker were researched and vetted by Sue Dorman, who teamed up with Brewer to petition the Mississippi Department of Archives and History to establish the historical marker. Brewer said she heard the MDAH trustees who review the paperwork turn down more markers than they approve.

Dorman conducted research mostly through newspaper articles on micro-film at the library. There she found articles about the Carruths and Eddie Hinnant’s piano ploy in the 1930s. From research to MDAH approval, the process took about a year, Brewer said. Brewer also said she and Dorman are looking forward to taking on a few more marker projects this year.

“We are very fortunate here in Brookhaven to have city leaders who believe in preserving the history of the town,” Brewer said. “If it weren’t for Alderman-at-Large Karen Sullivan and other city officials, we wouldn’t have had the funding to put the sign up this soon. We would have had to raise the money ourselves and markers can cost anywhere from $1,500 to $2,000 apiece.”

When the gleaming green-and-gold sign was unveiled Wednesday morning under the large metal coffee pot atop its subtle, white base building, descendants of the Carruths who founded it were present. Siblings Lu Becker and Ed Carruth are the founding Carruths’ grandchildren, and joined their cousin Paul Ott in sharing a few memories before the unveiling.

Ott said the Coffee Pot is where he had his very first hamburger — for 10 cents. The menu was a source of humorous wonder-filled exclamations from the crowd when a few other items and their prices were named, including a Coke for 5 cents, a barbecue sandwich for 15 cents, a goose liver toasted sandwich for 15 cents and the most expensive item on the menu — ham and two eggs or Sunday lunch plates, each for 35 cents.

“At the ceremony today almost everyone had some type of memory of the Coffee Pot,” Brewer said. “My friend Marilyn Dow-Harris grew up a few houses behind the Coffee Pot. She said at that time, Tom Hickman had his lumberyard there and a small store in the actual building. She said she and her cousins would go up there a dozen times a day to get cookies.”

The unveiling Wednesday morning drew a large crowd, who hung around to share memories and talk about other interesting, and old, places in Brookhaven.

Ott ended his talk with the crowd with an invocation to build back the beloved café exactly where it has stood for decades.

“I’m very excited about sharing the history of Brookhaven and Lincoln County with others,” Brewer said. “It really warmed my heart this morning to see so many people come out and celebrate the day with us. We ended 2015 with the dedication of the Pearlhaven community marker and we’ve started 2016 with the dedication of the Coffee Pot Inn marker. I can’t think of a better way to end or begin a year.”