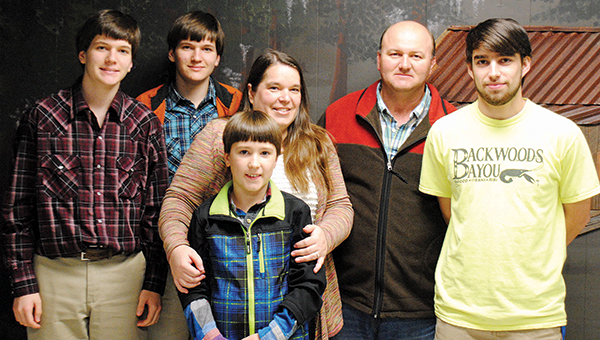 Photo by Aaron Paden / Nathan Lambert, right, poses for a photo with his parents, Amanda and James Lambert, and his three brothers, Nicholas, Noah and Nolan, at Backwoods Bayou where Nathan works after school.

Of the 106 students nation-wide receiving the 2016 Horatio Alger National Scholarship, two are from Mississippi. One of the recipients is Nathan Lambert of Wesson.

For most of his life, Lambert went to school at Enterprise, but for the past two years he’s attended Loyd Star. Lambert has a 4.0 grade point average. He’s been a programmer, designer, builder and team captain at his school’s robotics team. He’s played varsity basketball, and he’s been a member of the Fellowship of Christian Athletes and First Priority of America.

By all accounts, he is an accomplished student, but it wasn’t clear that he was going to be able to progress beyond the high school level.

“I was getting nervous about affording college,” Lambert said. “College these days is quite expensive. When I heard it, I was thrilled. It renewed my hope in going to college. I about cried. I was pretty happy.”

The scholarship program was established in 1984 by the Horatio Alger Association of Distinguished Americans to help exceptional students going through financial hardship.

“The 2016 Horatio Alger National Scholars demonstrate remarkable strength, courage and resilience in their pursuit of the American Dream,” Horatio Alger Association chairman Tony Novelly said. “Despite having faced significant challenges in their young lives, these students remain dedicated to their studies and find time to give back to their communities. As the future leaders of this country, our association members, life partners and friends are honored to support these inspiring scholars on their paths to achievement.”

According to the association, all scholarship recipients will also be given an all-expense-paid trip to Washington, D.C. for the Horatio Alger National Scholars Conference to attend college-preparedness sessions.

Lambert said at the top of his list of colleges is Mississippi College, where he hopes to learn electrical engineering. However, he’s also considering going into ministry.

Lambert attributed his success in school to strict parental discipline and a competitive spirit.

“I was taught to be well disciplined, well mannered and stuff,” Lambert said. “I’ve always been really competitive. I love competing, and I love coming out on top. As I’ve gotten older, I’ve realized more along the lines of God tells us we should do our best in everything that we do. So I just put that towards my school work.”

Lambert said his life ambition is “to serve God, no matter what I do. I want to always have God first.”