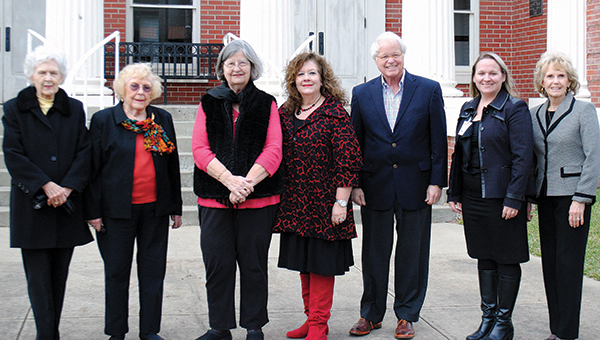 Brick by brick, Mississippi School of the Arts is hoping to raise the funds necessary to complete the restoration of the historic Elizabeth Cottage.

Now part of MSA, Elizabeth Cottage, built in 1913, was originally a home for the president of Whitworth College.

Phases one and two of the restoration project were funded by grants from the Mississippi Department of Archives and History. On Dec. 4, the MDAH Board of Trustees agreed on a final grant of $77,720 with the stipulation that the final amount be raised by the school.

“[We need] a little over $19,000 that we need to raise to make our match for the grant,” MSA Executive Director Suzanne Hirsch said. 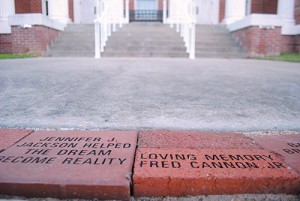 Photo by Aaron Paden / A brick campaign has kicked off to raise funds to finish a building on MSA’s campus.

The school is raising money for the effort by placing engraved bricks in front of Lampton Auditorium on the corner of S. Jackson Street and W. Cherokee Street. The first round of bricks have already been placed, and Brookhaven Monument is preparing another order. Hirsch said that so far about 30 bricks have been sold. A 4-by-8 inch brick is $100, an 8-by-8 inch brick is $250 and a granite 8-by-8 inch is $500.

“We’re going to frame the whole sidewalk,” Hirsch said. “… We hope to need to add some more rows.”

Coordinator of School Advancement Jennifer Jackson said the old Whitworth buildings would not have continued to exist without MSA.

“It was all in such ruin,” Jackson said. “So the dream of the school saved the beautiful campus and saved these historic buildings.”

At a gathering in front of Lampton Auditorium Thursday, Roberta Barnett reminisced about the establishment of Whitworth College as the site for MSA.

“We had some kind of a luncheon meeting, and we were all sitting around the table,” Barnett said. “Dr. Jim [Barnett] asked the governor’s wife to speak about it, and she was very glad to, and she said, ‘This would make a wonderful place for the School of the Arts.’ And boy did that just click with Dr. Jim, and he went back full force in the Legislature and talked to all the legislators and got them all excited about it. They were on board.

“Bill Jacobs was another one who really helped us a lot. He was editor of The Daily Leader at that time, and he would push everything he could towards the School of the Arts, and we got it.”

Hirsch said that MSA has three years to complete the project, but she hopes to get it done as soon as possible. Anyone who wants to purchase a brick can call the school at 601-833-1300.