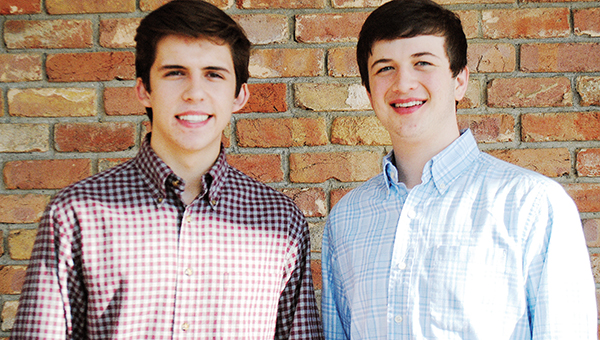 Photo submitted / Daniel Clark and Reid Roberson pose together for a photo Wednesday.

Brookhaven High School students and long-time friends Daniel Clark and Reid Roberson both received a near-perfect composite score of 34 on the ACT test.

The ACT is a national college admissions exam that consists of subject area tests in English, math, reading and science. The highest score possible is 36. The national average is 21.1.

“I’m really proud,” Clark said. “I’m thankful for all the teachers who have helped me along the way. Definitely a lot of people pushed me towards that. It was not a one-person accomplishment.”

Roberson and Clark are both active in extracurricular activities. Roberson has been in debate and mock trial for the past four years.

Roberson’s favorite courses are math and science. He hopes to major in aerospace engineering at Mississippi State, and stay in Mississippi to work.

“I’m happy here,” Roberson said. “Ultimately, I just want to work in the aerospace engineering field somewhere in Mississippi. There are several places in the Starkville-Columbus area that do that. I think Airbus has a place there. Then there’s the Stennis Space center there on the Coast. So there are a lot of different places you could go.”

In 2013, Clark joined BLTeens, and the experienced helped him become who he is today.

“One thing that I really enjoy is theater,” Clark said. “Just having that experience with public speaking and getting up and singing in front of people, it really helped me have the confidence to branch out and try starting my own tutoring service.”

Clark said a lot of people got lower scores than they’d hoped following the compulsory ACT exam for juniors last year. For the whole year, Clark has been tutoring students for the ACT every Wednesday and Friday. Clark said the experience of tutoring has helped him become a better student.

“That’s actually how I learn best. I found that even tutoring my core classes — not just the ACT — has made me such a better student,” Clark said. “It made me understand the material so much better. Having to translate it into somebody else’s language, how somebody else thinks, it really gives you a complete and total understanding.”

Roberson said the most important thing for new high school students to remember is that you’ve got to try.