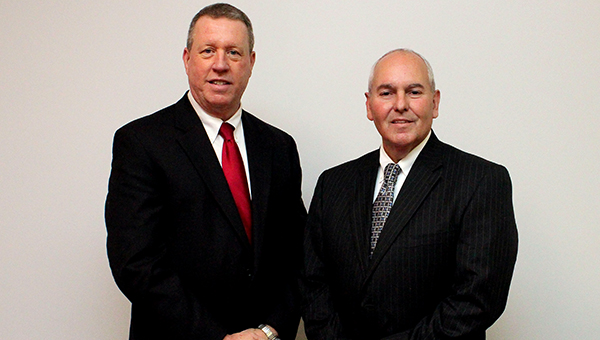 Ray Carlock (left) will take over as superintendent in July. Ben Cox (right) has announced his retirement at the end of June.

Carlock currently serves as superintendent of the Franklin County School District, a position he has held for four years.

“As superintendent of education in Franklin County, a major accomplishment for me was working with the school board, faculty and community to raise the district accountability score from a “C” to a “B” rating,” he said.

Carlock hopes to achieve a similar improvement in Brookhaven, which is currently at a “D” rating. To achieve this, he said the district will ensure that all teachers are growing students and that all students are growing, including both high and low achievers. He also believes a key to BSD’s success is motivating and developing students through a variety of extracurricular and academic programs.

“There is no limitation to what Brookhaven School District can be,” he said during a press conference.

At Franklin County, Carlock’s philosophy centered on student achievement first no matter what. He plans to bring the same philosophy to BSD.

Carlock also said he looks forward to taking advantage of the resources BSD, such as having a curriculum specialist.

Carlock applied for the job after speaking with current Superintendent Ben Cox, who will retire at the end of June.

“He had nothing but glowing things to say about the district,” he said.

Carlock was also motivated to apply because of the community support he has seen BSD receive over the years.

“The school itself and the things it does united the community in such a big way. These people become productive citizens,” he said. “Parent involvement and community support makes all the difference.”

“We had some good applicants, but you moved to the top,” BSD Board of Trustees Chairman James Tillman said.

Although he has not followed a traditional route, Carlock has always been drawn to education.

“When I first went to college I was in line to be a teacher,” he said. “But most of the boys from the county went into into engineering.”

Carlock decided to pursue petroleum engineering, but after just a few years he decided to try teaching.

“I found something I loved,” he said.

Carlock currently serves in the Mississippi Army National Guard as a lieutenant colonel at the medical command in Jackson. He is a veteran of Operation Iraqi Freedom and is a member of the American Legion, Veterans of Foreign Wars, Gideon’s International, Lion’s Club and Meadville Baptist Church, where he serves as a deacon.

He is married to Janet Calcote Carlock, and they have three children, Kane, Jace and Quin.

Carlock plans to move to the Brookhaven School District during the next few months.

Cox announced in November that he was leaving the position.

Before coming to Brookhaven, Cox served as North Pike superintendent for 14 years. He took over after a period of uncertainty at the position. Lisa Karmacharya, the superintendent before Cox, resigned in 2013. She faced heavy criticism by faculty and low performance in the Mississippi Public School Accountability rankings.

The sudden vacancy left the district without a superintendent. On June 9, 2013, two days after Karmacharya’s departure, Stephanie Henderson was unanimously voted in as interim superintendent. Cox stepped in as permanent superintendent on Jan. 30, 2014.