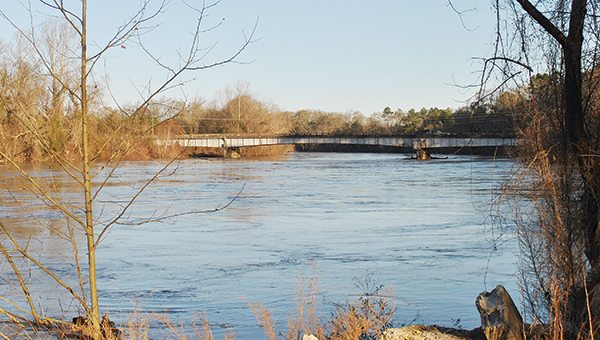 A Brookhaven woman camping in Franklin County was rescued safely late Tuesday night after flash flood waters swept her camper trailer into the Homochitto River, forcing her to cling to a telephone pole for more than an hour as water rushed around her.

Franklin County Emergency Management Director Mark Thornton said Virginia Gordon, 51, of Brookhaven, woke up at approximately 11 p.m. Tuesday to find that her camper trailer, parked at Wright’s Campground on the banks of the Homochitto River, was surrounded by fast-moving water.

Thornton said the woman called 911, and was on the phone with the Franklin County Sheriff’s Office for several minutes. Eventually, she was forced to jump from the trailer to avoid being washed away with it, losing contact with rescuers.

“She didn’t see the water until it was too late,” Thornton said. “She had to bail out.”

Gordon held onto a telephone pole for an hour with 6-foot deep water rushing past her as first responders searched for her.

Finally, she was located, but before the water rescue team could unload their watercraft and put it in the river, a local resident named Dustin Goldsmith retrieved Gordon in his own boat.

Goldsmith brought Gordon to the responders, who took her to safety.

“She was fine,” Thornton said. “She walked once she got out of the truck.”

Thornton said Gordon was the only person in the trailer, but her two dogs have not been found.

The flash flood was caused by a cold front that moved through the area on Tuesday. The National Weather Service reported areas of Franklin County received up to 4.5 inches of rain on Tuesday.

A flood warning for the Pearl River near Monticello continues at least through Friday. The river is expected to crest at 26.5 feet Friday. Flood stage is 22 feet.
At  8:15 p.m. Wednesday the stage was 23.6 feet, according to the National Weather Service. Minor flooding is occurring and moderate flooding is forecast. At 26.5 feet flooding occurs near the Highway 84 bridge at Atwood Water Park. At 26 feet, water covers Old Highway 27 about seven miles north of Monticello near Saint James Missionary Baptist Church. At 25 feet, water begins to flood lower portions of
Cooper’s Ferry Park in Monticello. At 24 feet, water appears in low areas in the extreme eastern portion of the city of Monticello.