Mr. and Mrs. Mike Henderson, of Caseyville, announce the engagement and approaching marriage of their daughter, Tiffany Leigh Henderson to Bradley Hunter Fauver.

He is the son of Mr. and Mrs. Brad Fauver, of Brookhaven. 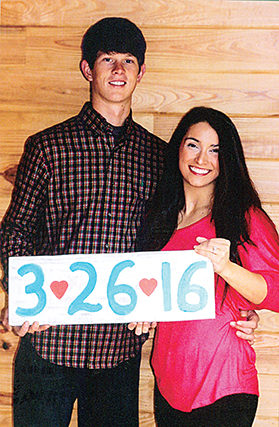 He is the grandson of Edwin Fauver, the late Mrs. Tommie Jean Fauver, Mr. and Mrs. Clifton Morgan and the late Mrs. Elsie Jean Morgan, all of Brookhaven.

The bride-elect is a 2011 graduate of Brookhaven Academy and a 2012 graduate of Ann’s K-9 Designs School of Pet Styling. She is the owner/pet stylist of Twisted and Tangled Pet Grooming Salon and is a member of the National Dog Groomers Association of America.

The prospective groom is a 2012 graduate of West Lincoln. He is currently employed with B & B Electric and Utility Contractors, Inc. in Brandon as an apprentice.

The couple will exchange vows Saturday, March 26, 2016, in a tree-top setting overlooking the Smokey Mountains in Sevierville, Tennessee.