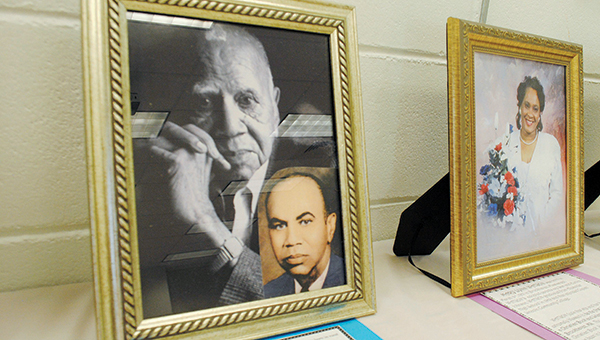 Photo by Aaron Paden / There are a total of 60 displays commemorating the achievement’s of Lincoln County’s first achievers.

The exhibit consists of rows of portraits featuring local black achievers accompanied by some information about each person.

“I do all the first achievers,” Allen said. “So mostly every year I’ve got a new person. It has multiplied. I had started with just a few right across the front. It got bigger, and I ended up moving it to the back, then it got too big for that so I had to put it in the meeting room.”

Allen gathers information and photographs from local families and passes it onto her daughter, Jennifer Allen Stenson.

“I went around and got all the information from everybody, and I let my daughter do the typing,” Allen said.

Allen may have started with just a few, but this year it’s expanded to 60 portraits. Included are figures like Irvin Robinson, the first black police officer in Brookhaven, and Archie Alphonso Alexander, who Alexander Junior High School was named after.

Allen said Robinson couldn’t work on the west side of the railroad tracks and was only allowed to police black areas. He retired in 1994 after 30 years of service.

Alexander was awarded his master’s degree in school administration at Northwest University in 1952.

“Alexander became the first African-American male in Brookhaven to serve as principal of Alexander high school and have the school named after him,” Stenson wrote for the exhibit. “Alexander then served 12 years as supervisor of education in the State Department of Education. After retiring in 1970, Alexander became a special consultant for the Title IV desegregation of schools at Mississippi State University.”

Allen said in the past, artists would often do presentations at the library for Black History Month, but after those events declined, she and her daughter decided they would gather information on all those featured in the exhibit. Allen said it was important for children to learn about black history.

“We need to do this to show them their background — to show how far we have come and show them we’ve still got a long way to go,” she said.