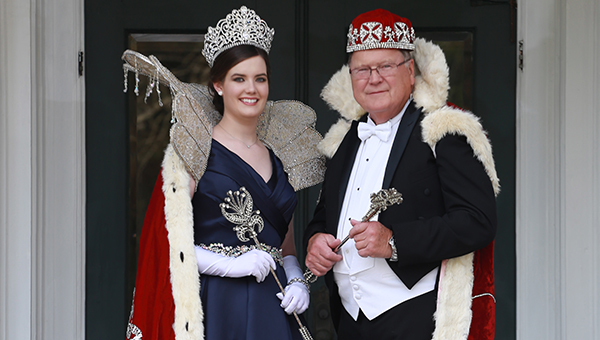 Photo by Johnny Smith / Krewe of Ceres announced Pat Hennington and Margaret Taylor as the 2016 King and Queen of Charity Ball.

Guests and members of the Krewe of Ceres 49th Annual Charity Ball were transported to the 1920s era of “The Great Gatsby” Saturday evening.

Once inside, guests were greeted with silver-lighted chandeliers, exquisite floral arrangements, and walls were draped in black fabric curtains.

The backdrop for the presentation stage was framed with black and gold fabric with lights. There was greenery and flowers flowing down the sides of the fabric. The gold king’s and queen’s bench had sequin gold, silver and black pillows. To finish out the stage, there were two large floral arrangements in the front with white flowers and greenery accents.

The tables were arranged banquet style and set with black cloths. Each place was set with a gold charger. Floral arrangements adorned the tables along with gold-glittered wine bottles. Votive candles completed the table décor.

The highlight of the evening was the presentation of the 49th Charity Ball court, which culminated in the announcing of the 2016 King and Queen, Pat Henning and Margaret Taylor.

George Patrick Hennington was born on April 22, 1939, to Albert Rowan Hennington and Anabel Rich Hennington of Wesson. He has one brother, Albert Hennington, and one sister, Judy Case, who both live in Wesson.  Pat lost his younger brother, Earl Hennington, when he was in his early 20s.

Hennington graduated with highest honors from Wesson High School where he lettered all four years in both basketball and football.  He received an athletic scholarship to play football at Copiah-Lincoln Junior College.  While there he was selected as class favorite his freshman year and Mr. Co-Lin his sophomore year.  He also made the All-State Football Team and has since been inducted into the Co-Lin Football Hall of Fame.  After Co-Lin, Hennington was awarded a football scholarship to Delta State University and received the Freddie Black Memorial Award. He graduated from Delta State with his bachelor’s degree in science and mathematics.

After college, the Henningtons moved to Huntsville, Alabama, where he was employed by the Chrysler Corporation as a statistician programmer and developer for the Marshall Space Flight Center and NASA.  While employed by the Chrysler Corporation Space Division, Hennington worked on the first stages of the first man in flight project and worked with the development and design of the first flight computer.  Before moving to Brookhaven, Hennington worked for the logistics outfit at Lockheed Martin on the C5A cargo plane.

The Henningtons moved to Brookhaven in 1969. Pat has always had a love for retail and connecting with people.  One of his greatest gifts is talking, and he has never met a stranger.  He opened Progressive Men’s Shop with his father-in-law, William Bryant Fauver, and they successfully operated it for 35 years with the help of his brother, Albert, by his side. As a businessman and a Christian, Hennington felt it was his civic duty to be actively involved with both the local church and the Chamber of Commerce.  Hennington had the honor to serve as president of the Chamber of Commerce and as a board member. He was president of the Industrial Development Foundation and a member for over 30 years.  He was a board member of State Bank and Trust Company and is currently serving as one of the directors on the board for Bank of Brookhaven.  Hennington was one of the original founders of the Brookhaven Pee Wee football league.  He was involved with the Dixie Youth Baseball Association when his sons were of playing age and also served as City Commissioner of the Brookhaven Little League.  Pat was also involved and supported the local division of the Boy Scouts of America in Brookhaven and helped with youth fundraising.

The Henningtons have been active members of First Baptist Church of Brookhaven for 47 years where he is a lifelong deacon, has served on multiple committees and has been chairman of the finance committee.  Pat and Carolyn have both been actively involved with the First Baptist Church youth and taught youth Sunday school for over 30 years.  They have enjoyed mission trips, youth trips, ski trips and Disciple Now weekends.  Hennington’s hobbies include golf, hunting and fishing.  Because of his love for the outdoors, Pat was involved as the host chairman and contact person for the local division of Ducks Unlimited, which focused their support on wildlife fundraising and conservation.

Now that he is rolling into retirement, Hennington enjoys driving cars for Stan King GM Superstore and cooking his wife’s favorite meals. He still misses they days of drinking coffee with friends, fitting people with suits and ties and selling cowboy boots and Levi’s jeans from Progressive Men’s Shop.

The 2016 Krewe of Ceres Charity Ball Queen, Margaret Virginia Taylor, is the daughter of Judge and Mrs. Michael Madison Taylor. She is the granddaughter of Mrs. James Calvin Pierce, the late Bruce Holmes Brady and Mr. and Mrs. Madison Leach Taylor.

Taylor is a 2011 homeschool graduate. During her junior and senior years, she was dually enrolled at Copiah-Lincoln Community College, where she was a member of Sigma Kappa Delta English Honor Society and Phi Theta Kappa Honor Society.

In 2010, she served as president of Junior Auxiliary’s Crown Club, where she helped raise funds for charitable organizations such as Brookhaven Animal Rescue League. During her time in Crown Club she also served as decoration chairman, photographer for Cookies and Milk with Santa and photographer for the Bow Wow Run.

Taylor, a communing member of Faith Presbyterian Church in Brookhaven, taught vacation Bible school throughout junior high and high school, worked in the church’s nursery and participated in a mission trip to Belize in 2010.

In May 2015, Taylor graduated magna cum laude from Mississippi College with a degree in elementary education and endorsements in history and English. While at Mississippi College, she was the recipient of a Phi Theta Kappa Presidential Scholarship and also received the Student Government Association Leadership Scholarship. Her senior year she was awarded the Delta Kappa Gamma scholarship given annually to one outstanding female education major in Mississippi.  She was a member of Kappa Delta Pi International Education Honor Society, Omicron Delta Kappa Academic, Leadership Honor Society, Alpha Chi Academic Honor Society, Teacher Education Program and was on the President’s List or the Dean’s List every semester.  In May of 2015, Taylor became a licensed Mississippi teacher of grades K-6 and 7-12 in history and English. She is also a certified Project Wild Educator and Project Learning Tree Educator.

At Mississippi College, she was selected for Who’s Who and was actively involved in campus life.  She worked as a resident assistant for a freshman girls’ hall. She served on the Student Judicial Council and was appointed student representative on the Professional Education Advisory Committee. She was elected to the Student Senate for three terms and served as the Senate’s reporter. She served on the Academic Affairs Committee and the Residence Life Committee. Taylor was also a contributing writer for the Collegian student newspaper, group leader for the Student Leadership Summit and a Reformed Youth Fellowship Core Group Member. As an active member of the Nenamoosha Social Tribe at Mississippi College, she served as rush counselor. While at Mississippi College Taylor served the community through involvement the Salvation Army, Clinton Nature Center, Baptist Children’s Home, Crisis Pregnancy Center, Mission First, Morrison Heights Baptist Church Food Pantry, YMCA, We Will Go, Christmas Book Drive, Stand for Freedom, Mustard Seed and spent many hours volunteering with Mississippi Blood Services.