Update: The FEMA building in Brookhaven is now open to the public as a storm shelter until the severe weather has passed this evening.

There will be chairs at the building, but nothing more, so citizens are asked to bring just what they will need for the duration of the storm. Galey said absolutely no alcohol beverages are allowed at the shelter.

Severe weather is expected in the area today, mainly from noon to 6 p.m., according to the National Weather Service.

The area will also be under a wind advisory from noon  to 6 p.m. Wednesday. Sustained winds will build to a range of 20 to 30 mph by late this afternoon with gusts up to 45 mph possible through  tonight, according to the NWS.

Though April is tornado season in Mississippi, the months of October, November and December are also active. The state has seen several tornadoes this winter, with seven being confirmed Feb. 15, including an EF-2 that hit Copiah County.

Damage near the Lincoln-Copiah line that same day was attributed to straight-line winds.

“An intense microburst occurred along the Lincoln/Copiah County line,” the NWS said. “Damage occurred just west of Jackson-Liberty Road and north of Norton-Assink Road. Here a mobile home was rolled multiple times and destroyed. A couple minor injuries occurred at this location.

“Other damage that was noted was many uprooted trees along nearly a three-mile swath. All of the uprooted trees were blown down to the east-northeast. Along Old Red Star Road, the roof of a metal shed was blown off and tin was blown into a tree along with some tin peeled off the corner of a roof of another home. The width of this damage was nearly one mile wide with max winds around 95 mph. The damage ended near Foster Lane near the county line.” 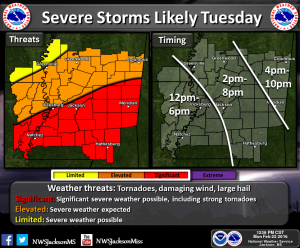