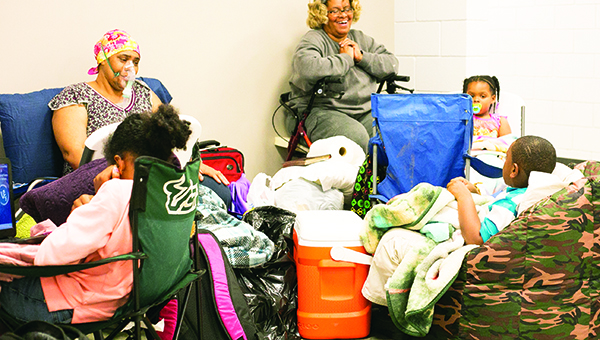 Photo by Kaitlin Mullins / Leticia Coleman (left) and Ann Moore (right) gathered with relatives in anticipation of Tuesday’s weather at the FEMA building. Coleman and Moore, both of whom live on Industrial Park Road, said they weren’t taking any chances, especially losing power. About a dozen people took shelter there.

Under the threat of severe weather, and given the recent tornado and storm destruction in the surrounding areas, city and county officials agreed on Tuesday to open the FEMA building in Brookhaven as a shelter.

He said then the building is only to be opened as a shelter if the governor declares a state of emergency, and is intended for evacuees during hurricanes or similar major events.

“We decided to just be cautious and go ahead and open it,” Cox said at the shelter Tuesday among a dozen people waiting out the weather.

“We are going to work on a plan and process for opening the building for weather,” Galey said.

Galey said on Wednesday he has a meeting with MEMA and FEMA in early March to go over details about shelter use, but it seems that they will be able to open the building during severe weather in the future.

Thankfully, Galey said, there were no reports of any damage from Tuesday’s high winds and heavy rain.