A Brookhaven Academy fundraising event is sending a young outdoorsman to turkey hunt with popular television hunting personality Michael Waddell, with a lunch event to follow. At the lunch, a second youth hunt with Wadell, the host of the “Bone Collector” and “Realtree Road Trips,” will be given away.

On Tuesday, BA drew the name of Caleb Carithers, who will go turkey hunting with Waddell on March 12. That week is designated as youth turkey season, where adults can join younger hunters but only youth may carry guns to hunt. Seasoned Outdoor Channel personality Waddell will speak at a lunch event from 10:30 a.m. to 12:30 p.m. in the multipurpose building following the hunt. 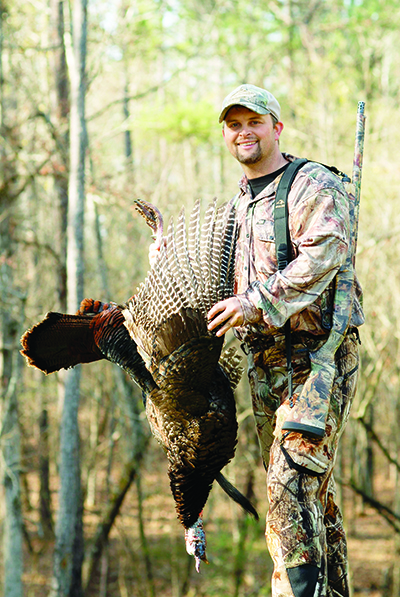 Photo submitted / Michael Waddell, host of the “Bone Collector” and “Realtree Road Trips,” will take Caleb Carithers on a hunting trip on March 12.

Brian Emory, director of development at BA, said Carithers, a seventh-grader, sold tickets to multiple family members and is a big fan who knows a lot about Waddell.

Tables that seat 10 people apiece are available now for $750 apiece. Payment must be made in full by March 11. Individual tickets are available to the two-hour lunch event for $45 apiece. Each ticket includes lunch and one entry into a second morning youth turkey hunt to be given away at the lunch. You must be in attendance to win the second hunt.

Emory said 2,000 tickets for the drawing were sold to people all over Lincoln County and as far away as Tennessee. Emory said BA wanted to give everyone the opportunity to be involved with this fundraiser that is focused on youth hunters.

Realtree and Bone Collector brand merchandise will be given away as door prizes. A Remington 870 20-gauge youth shotgun, ThunderHawk crossbow, Danner boots (one pair, any size) and an Avian X turkey decoy package will be auctioned at the lunch event.

“Typically you don’t get big stars coming to Brookhaven, they might be in Jackson or Natchez,” Emory said. “But after he leaves the school he will do an appearance at Hobie’s, so the general public can go there to see him, too. We wanted to do something everybody can be a part of.”