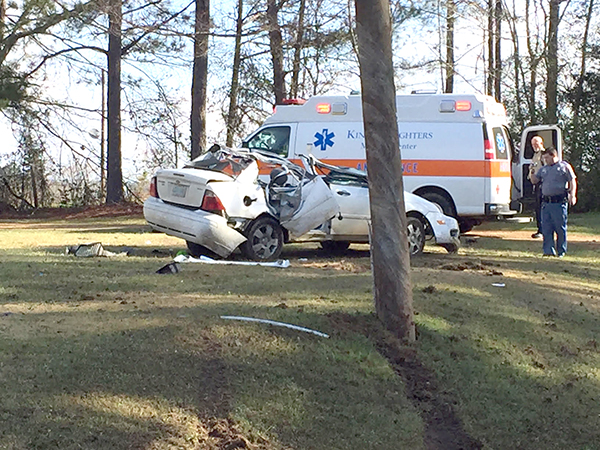 The Loyd Star single-car wreck that left a woman with severe injuries.

The woman who was severely injured in Loyd Star Friday morning has died. Another wreck that occurred shortly after also proved fatal for one young woman.

Deborah Kimble, 52, from Brookhaven was pronounced dead at 5:44 p.m. Sunday at the University Medical Center in Jackson from a result of her injuries in the accident.

Around 8:53 a.m. on March 4, troopers responded to an accident on Hwy. 550 just east of Loyd Star in which a female driver was ejected from a white sedan.

“A white 2002 Ford Focus driven by Deborah Kimble, 52, from Brookhaven was traveling east on MS Hwy. 550,” Mississippi Highway Patrol Troop M Spokesman Cpl. Brandon Fortenberry said. “The vehicle left the right side of the road causing the driver to lose control. The vehicle then crossed the highway coming into contact with a power pole. The driver was ejected from the vehicle. Kimble was transported to KDMC in Brookhaven and then air-lifted to UMC in Jackson. The accident is still under investigation.”

Fierra Jones, who lives near the wreck scene, said the driver lost control of the vehicle, drove through Jones’s yard and hit a utility pole just before 9 a.m. The car flipped and the driver was ejected from a back window, Jones said.

An accident was reported at about 10 a.m. at Hwy. 84 and Hwy. 583 Friday involving two vehicles. The jaws of life were requested and Nealey Blair Brown,18, of Bogue Chitto was transported from the scene with critical injuries to King’s Daughters Medical Clinic. It was confirmed by Lincoln County Coroner Clay McMorris that she died at 12:40 p.m. at KDMC.

Clint Earls with the Brookhaven Police Department said the accident involved a small passenger car and a pick-up truck pulling a trailer.