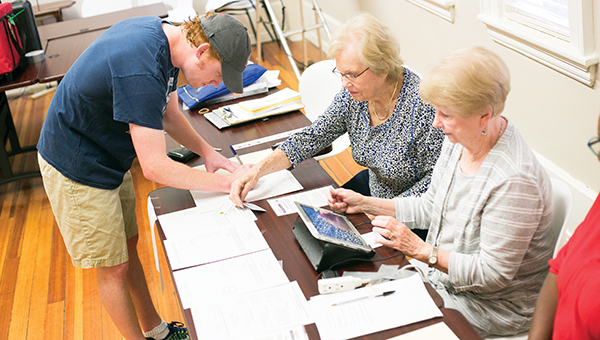 A voter prepares to cast a ballot Tuesday morning in Lincoln County.

It is time again to exercise the right on which our governmental system is based — voting. Polls will be open from 7 a.m. until 7 p.m. today.

Voters will have the opportunity to cast a ballot in the Democratic Party or Republican Party primary for president of the United States and for congressman.

For president of the United States, there are 13 Republican candidates and five Democratic candidates on the respective ballots. While some of these candidates have suspended their campaigns, their names will remain on the ballots, Secretary of State Delbert Hosemann said.

Republicans Donald Trump and Ted Cruz campaigned in Mississippi on Monday, and John Kasich was in the state last week. Marco Rubio has not personally campaigned in the state, but like other candidates he is promoting local endorsements.

Several thousand people turned out to see Trump’s Monday evening appearance at Madison Central High School. After the gymnasium was full, an overflow crowd sat in the football stadium and watched his speech on the scoreboard.

Cruz spoke to more than 200 people at a catfish restaurant Monday afternoon in Florence, standing on a table in a room with “Andy Griffith Show” wallpaper. He took a swipe at Trump’s campaign slogan.

“Now, it is easy to talk about making America great again. You can even print that on a baseball cap,” Cruz said. “But the real question is, do you understand the principles and values that made America great in the first place?”

Republican Gov. Phil Bryant endorsed Cruz in a news release Monday but did not appear at the campaign event.

Below are voting tips from the Secretary of State’s Office:

• Don’t forget your photo ID: A list of acceptable forms of photo ID is available at www.MSVoterID.ms.gov.

• Vote at off-peak times: Vote mid-morning and mid-afternoon when voting is slower.

• Know where you vote: A polling place locator is available on the Secretary of State’s website at www.sos.ms.gov/pollingplace.

• Attire: It is against the law for any candidate or candidate’s representative to distribute campaign literature within 150 feet of a polling location. It is the position of the Office of the Secretary of State that wearing clothing with a candidate’s name and/or picture on it or other campaign paraphernalia within 150 feet of a polling location constitutes the posting of campaign literature and is prohibited.

• No loitering: The polling place should be clear 30 feet of all people except elections officials, voters waiting to vote or pollwatchers.