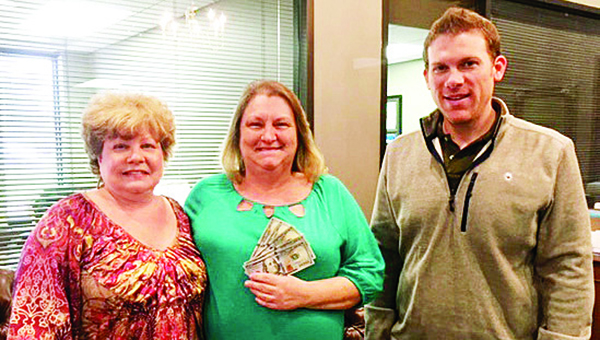 Photo submitted / Gail Thompson Kyzar of Bogue Chitto won $500 cash in First Bank’s “Win the Benjamins” Facebook Contest. Kyzar said, “My husband has been laid off from his job for quite a few months due to the economy and only recently went back to work. This is such a blessing.” She is pictured (center) with Brookhaven Branch Manager Connie Dunn (left) and Relationship Manger Eli Ferguson (right).
The contest, sponsored on First Bank’s Facebook page, began in mid-February and ended on President’s Day. To comply with Facebook rules, participants were eligible by “liking” the First Bank page and commenting on a recent post. The winner was then chosen by random drawing. Both customers and non-customers, 18 and over, could enter the “Win the Benjamins” contest.