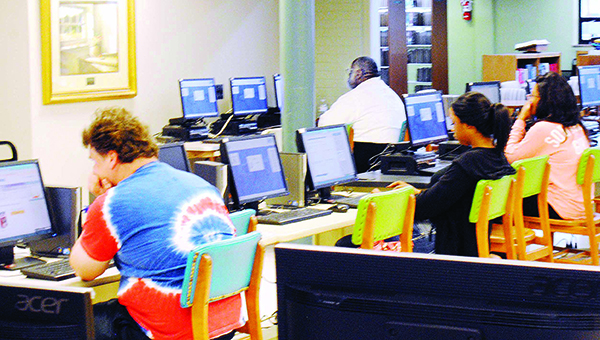 Photo by Aaron Paden / Local residents make use of the Lincoln County Public Library computers Friday. People come who don’t have Internet access themselves or who just want to take advantage of the quiet atmosphere.

To survive, libraries have to adapt.

Search engines like Google made discovering new online sources easy. In 2003, the Wikimedia Foundation was formed with the goal of providing editable reference materials to everyone free of charge. Even education has moved, in part, online. In 2008, Khan Academy was formed with the goal of bringing a “free, world-class education to anyone, anywhere.”

With struggling local economies and a global interest in bringing information online, many libraries have faced cuts. Fortunately, the Lincoln-Franklin-Lawrence Regional Library system has managed to stay relevant in a changing world.

The importance of the Internet is undeniable. As a resource, it’s becoming more and more fundamentally necessary. Castilaw said it’s impossible to find a job without using it. But some in the community still don’t have regular or adequate access.

“All day long we have people here working on job applications,” she said.

Libraries have always been more than just a warehouse for books, but increasingly they have been expected to do more and with shrinking budgets. The library stores microfilm for over 140 years worth of newspapers. There are genealogical records, audiobooks and DVDs. There’s a meeting room for local public-access gatherings. The library provides literacy programs for young children and a large-print catalogue for aging patrons.

Of course, the library is also home to over 19,000 works of fiction.

“Especially when the economy is bad, people think the library just has fun books to read and that’s just not important,” Castilaw said. “But, when a community has a library, even people who are in financial situations and are struggling, as long as they have that outlet to go to find some recreation, it keeps them motivated.”

“A lot of people like to get away from their homes and ringing phones,” Castilaw said. “A place where their minds can relax and focus on anything from a casual magazine to some real in-depth research article they want to be able to concentrate on without interruption. In that sense, the library is a space for people to get away from interruptions. It’s not the extreme it was before where you couldn’t talk. It’s relaxed. But it still offers that kind of atmosphere.”

These days, libraries do offer e-books and other digital resources, but many books written before the Internet don’t exist in digital form. Even when e-books do exist, studies have shown that it may be easier to retain information from physical books.

“All of us have certain situations where e-books are convenient,” Castilaw said. “Maybe you’re traveling or something like that, but a lot of the time you still want to sit down with a book. There is a difference in the way you read an e-book mentally than you would a physical book. Your mind actually picks up on things more than words when you’re using a book. A good example is skim reading. A physical book you can skim read because your mind is deciphering structures that this is not relevant, or this is. You can’t necessarily do that with an e-book because it takes you so much longer to put those connections together.”

The library, though heavily supported by the community, is not immune to budget cuts. State funding comes in the form of grants, and Castilaw said they’ve recently seen cuts.

“It’s expected to be permanent,” Castilaw said. “The library is funded through a combination of state, local and county resources. The state portion is actually a grant, which means structurally they can cut it out whenever they want to.”

The library also applies regularly for federal grants, and Friends of the Library supports the library through fundraisers, but Castilaw said money is still getting stretched thin as the library has taken on an ever-broader set roles.

“Funds get stretched across the different people groups that we need to be able to support,” Castilaw said. “We’ve had to get really creative with that.”