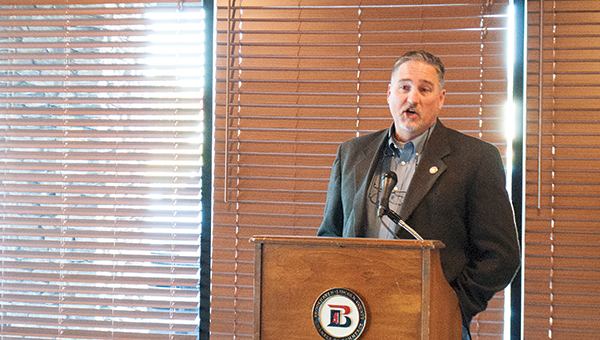 Photo by Aaron Paden / Chamber members were given the opportunity to hear from local representatives during the annual legislative breakfast.

Lincoln County residents and officials got a chance Monday to question their representatives in Jackson.

Chancery Clerk Tillmon Bishop moderated a legislative breakfast at Mitchell’s in Brookhaven. It was the first time in Bishop’s memory that the annual breakfast featured all three speakers as Republicans. Rep. Vince Mangold, the freshman of the group, replaced long-time incumbent Democrat Bobby Moak.

During the breakfast, attendees were given the opportunity to write down questions for the legislators. Tillman read out several of the questions for them to answer. The first question, echoing the controversy leading up to last year’s elections, asked if Mississippi planned on fully funding the Mississippi Adequate Education Program.

“If we had unlimited resources, I would certainly want to fully fund MAEP and make up any deficits in the past,” Sen. Sally Doty said. “But we have serious budget concerns. We’re trying to stretch our resources as much as we can.”

According to Doty, education received 54 percent of the state budget.

“We’re adding an additional $40 million this year, and I think there are plans in the future, if our revenue holds up, to make some increases as well,” she said.

She also suggested that MAEP may be changed to reflect money for teachers supplies that are currently held separately from the MAEP formula.

“I’ve never been a fan of MississippiCAN, which runs our Medicaid,” Currie said. “It’s an outside company out in St. Louis, and we send a whole lot of money to them. Last year, we were $100 million deficit. This year, we’re in a $50 million deficit, and the rolls of Medicaid dropped 20,000 people. We should not be in a deficit in Medicaid. When we looked at it, the hospital association and myself, we’re spending $200 million a year on administrative costs.”

The Division of Medicaid has contracts with two coordinated care organizations, who are responsible for providing services to the Mississippi Medicaid beneficiaries who participate in the MississippiCAN program, according to the state’s website.

The bill, which would require that the Medicaid reimbursement rate match the Medicare rate, passed in the House on March 2 and has been sent to the Senate.

Doty answered a question on campaign transparency. Currently, it’s legal for candidates to spend campaign finances on personal expenses as long as they pay income tax on it. Doty said the issue is currently being discussed, but may not be addressed fully until the next session.

“What we have to do is transition into this ban,” Doty said. “I think that’s something we’ve got to do. This year, really what we’re focusing on is the mechanics of our election process, and we’ve had some time to really study that. That is the 250-page bill that I’m working on right now trying to get out of committee. I think certainly the time has come for us to be more transparent in our spending with our campaign spending. I think you’ll see that, if not this year, probably next year.”

While Mangold emphasized that this first session has been a learning experience for him, he was appointed vice-chair of the House Agriculture Committee for his expertise as a farmer. In his introductory statement, he related his first experience presenting a bill to the House floor.

Mangold fielded a question on budgets for highway infrastructure.

“It’s going to be a difficult discussion as we move forward. It’s a very heated debate. The comment has been made, ‘Well why do we need all these four-lane highways.’ At the time it was a good idea. We can’t just go back and unroll them and go back to two-lane highways,” he said.

Mangold said they are looking at ways to bring more money to counties, but funds are short.

“What we’ve heard on our side is that everything is going to be prioritized,” he said.

The event was sponsored by the Brookhaven-Lincoln County Chamber of Commerce.