“We’re all excited about the opportunity to serve the community,” KDMC Foundation chair Mary Lu Redd said. “We have a wonderful facility already, but any time we can make an improvement like this, it really makes us proud.” 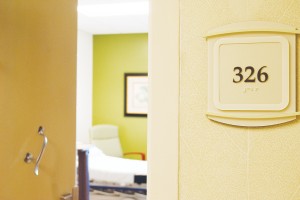 Photo by Aaron Paden/ Room 326 will be one of the private prep and recovery rooms for the endoscopy suites.

An essential tool for modern medicine, endoscopes allow doctors to see inside the body.

“The No. 1 procedure that they do with scopes are colonoscopies,” KDMC Foundation director Johnny Rainer said. “That’s a good screening tool for colon cancer in both men and women.”

While colonoscopies are necessary and routine medical procedures, they require several days of preparation, a strict diet and a regiment of laxatives.

The effects can be embarrassing for patients, and KDMC felt privacy was in order. KDMC Marketing Director David Culpepper said the endoscopy suites will provide patients with a private space where they can feel more comfortable about the procedure.

“It will be a little more privacy and a lot easier for them to come in from a procedure and have a private room for prep and recovery,” Culpepper said. “It also relieves some congestion from the outpatient area and holding area.”

Included in the suites are six private rooms for preparation and recovery. KDMC does colonoscopies three times a week, and up to 12 in a day. Assuming there are no complications, Culpepper said the procedure takes about 20 minutes.

Along with a new space, KDMC also bought new equipment. There are two rooms for doing the procedures, and both are sporting new endoscopes with high resolution displays, according to Chief Nursing Officer Cheri Walker.

“The resolution is really good,” Walker said. “It’s like a big-screen display. This allows them to find anything that looks questionable.”

Along with colonoscopies, the endoscopes can check other areas, like the esophagus. Walker said that while colonoscopies are routine, some other endoscopy procedures are called for when a serious problem is suspected.

Along with the KDMC Foundation and Willing Hearts Circle, donations were also received from the 1914 Club, the E3 Employee Giving Club and donations from the community.

“There were a lot of groups,” KDMC board member Betty Smith said. “It’s been a joint effort. So many branches associated with the hospital and the foundation helped.”

According to Culpepper, the new suites should be seeing patients as early as Wednesday.