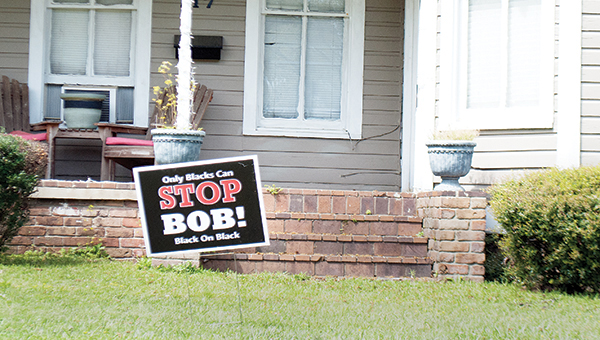 Photo by Aaron Paden / A sign designed by Elisa Corley stands in protest to black-on-black crime on North Jackson Street.

Last year, Brookhaven saw 10 homicides that sent a shock through the community. Those deaths have galvanized community leaders into searching for a solution. Elisa Corley with the sheriff’s office has been making signs to raise awareness about black-on-black crime.

“Only Blacks Can Stop BOB,” the signs read. They can be found around town.

Corley, who ran for alderman in 2005 and 2009, said the goal wasn’t to cause offense or to present himself as a radical activist.

“Once a lot of people start seeing, it becomes a coalition against black on black crime,” Corley said. “Hopefully it will get into the mind of these kids they see these signs.”

In the past few months, there have been several talks about what can be done to stop the violence. Corley said the police department is important, but positive change has to begin with the community.

Corley said he uses the profits from the signs to buy more signs. The cost of production can depend on the bulk of the purchase.

“Even if it doesn’t go far, at least I’m trying,” Corley said.