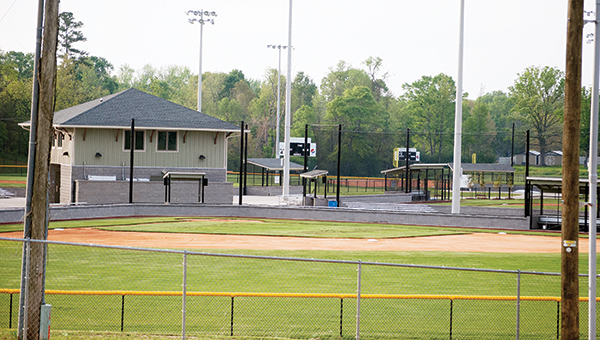 Photo by Aaron Paden / The new baseball facility will open this weekend for a league-wide jamboree.

“All teams will play a strict one-hour game to get a feel for the new field as well as the start of the new year,” Jordan said. “Games will start at 10 a.m. and go through late afternoon. Special thanks to our volunteers and coaches for taking their times out to help change the lives of young men and young ladies across our county.”

Jordan said there will be 29 teams across all leagues. Jordan said sign-ups have increased from last year.

Saturday’s ceremonies include a field dedication, the National Anthem and prayer. Jordan also said agents from Farm Bureau will be attending to grill hamburgers for the event, and there will be full concessions.

“We encourage the public to come out and not only support the facility, but to support the young men and women who are the future of Lincoln County,” Jordan said.

Jordan said the baseball complex will have a positive economic impact on Lincoln County.

“I would say it’s one of the biggest economic impact opportunities we’ve had in years here in Lincoln County,” he said. “We’re going to bring in a lot of funds and a lot of opportunity, and that’s what we’re here to do. We first owe it, as leaders of the community, you owe a debt to your citizens, but also then you owe your citizens a chance to get some return on that investment and we want to do that with the complex.”

The Lincoln County Board of Supervisors passed a resolution to issue up to $2.5 million general obligation bonds to fund construction of the facility. Construction began in July.

“I’d like to personally thank the Lincoln County Board of Supervisors along with the Lincoln Civic Center Commission and baseball committee for funding, planning and executing one of the nicest parks in the state of Mississippi,” Jordan said.