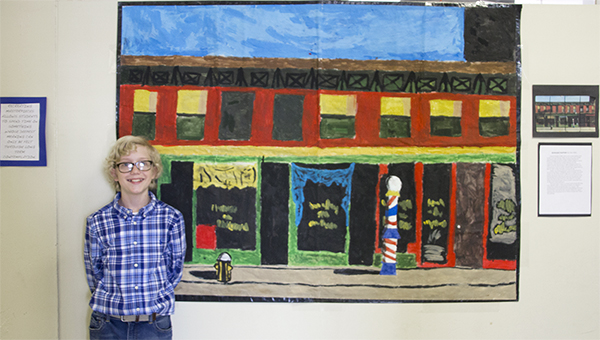 Alexander Junior High School provided students with the opportunity to develop real-world skills by allowing them to cultivate their love of art.

The school hosted its Quest Art Show on Tuesday, featuring the school’s seventh- and eighth-grade gifted and talented students.

Seventh-grade student Sam Allen explained the process the students were required to complete for the masterpieces reproduction project. 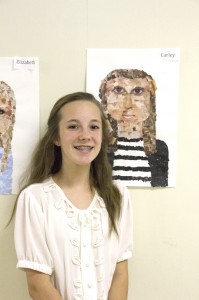 Below, eighth grader Carley Craig stands with her mosaic self portrait.

“I really liked it because it’s very colorful for such a downtown scheme, and I liked how much was in it,” Allen said. “I liked art before this project, but I started to like it more with this project.”

Eighth-grade student Carley Craig said she enjoyed the project because she got to be creative with it.

“These are our mosaic portraits,” Craig said. “We got a ton of magazines, and we ripped up the pieces of the colors that we wanted and we put them all together. We had to draw it first so you drew the shape and filled it in however you wanted to. It took us a little while because it was hard to find all the flesh (color) because everybody needed it. I liked the project because I’ve done something like it before, and I liked pulling the pieces out and putting it together to make a picture.”

Driskell said it is important to expose children to art this young because it develops their critical thinking processes.