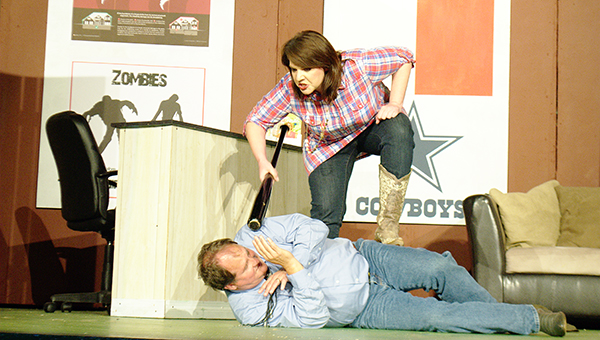 Following an introductory scene, the romantic comedy is performed as four unrelated scenes set in Dallas, Honolulu, London and New York. The common thread throughout the scenes is the power of the moon.

“The common threat throughout the whole play is there’s the gorgeous, romantic moon,” Matt Coleman said. “Each scene references the moon in some way. The idea is, the moon’s ambiance is so powerful on this special night that whomever you’re supposed to fall in love with is revealed.”

Matt Coleman is one of the directors of the play. Each scene has its own director. Brookhaven Little Theatre Executive Director Greg Russell said the nature of the play presented an opportunity for the group.

“The way this thing is with the different scenes is a good chance for us to break in new directors,” Russell said. “So we have four new directors.”

Coleman acted in over 20 productions before giving directing a try.

“Directing is far more all-encompassing,” Coleman said. “If you’re an actor, you basically have one role, one set of lines, one set of mannerisms and one set of movements that you have to know. When you’re directing, you basically play every part in the scene or in the play. You have to visually figure out how to bring it all together.”

Coleman said the most important thing in a production is to have fun.

“If we aren’t having fun, that’s going to be reflected in the performance,” Coleman said. “BLT has done a wonderful job of presenting great plays that are humorous and everybody comes together.”

Tickets can be bought at the door, but Russell said people who want to attend can also buy tickets from the Brookhaven Little Theatre’s Facebook page. Russell said that feature will only work on computers, not mobile devices.