She is the daughter of Stacey Day, of Paducah, Kentucky, and the late William LaRue Byrd, of Brookhaven. 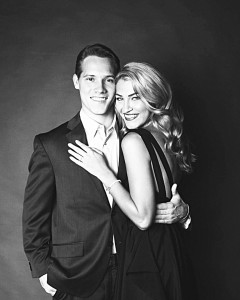 He is the son of Tonya Harrell and Mr. Robert Donald Harrell II, of West Point.

She is the granddaughter of the late Jeanie and Red Wilkinson, Margie Marie McGeehee, the late Emmett McGeehee and Mr. and Mrs. Jerry Byrd, all of Brookhaven.

He is the grandson of Mr. and Mrs. Billy Smith, the late Robert Harrell Sr. and Caroline Bryan Harrell, of West Point.

The bride-elect is currently completing her degree in elementary education from Millsaps College and will graduate in May 2016. She is currently employed with Wilhelmina Models in Los Angeles, California, and often travels with her modeling career.

The prospective groom currently completing his degree in environmental geology from Millsaps College. He is currently employed with Waggoner Engineering as a GIS analyst.

A small courtyard wedding in Jackson is planned for the couple.