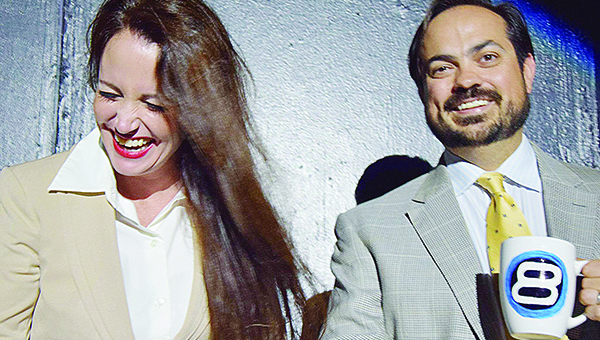 Photo submitted / Wendi and Ryan Case perform together in Act 1 Scene 1, “Love Is On The Air.”

Be prepared to laugh like you were at a live performance of Jonathan Winters or Robin Williams. You will be hard pressed to catch your breath at times. This Jones Hope Wooten comedy will entertain like few comedies have. What a fine choice by BLT and it just gets better.

It is perfectly cast with local talent, and they have as much fun or more than the audience. This production is a must see. There are almost 30 players, and they have worked with a passion for three months to deliver a great performance for the community.

I could mention some standouts, but they are only because of the roles they landed. Everyone does a fine job on stage, and the crew behind the scenes with the set preparation, lighting, and general organization. So much goes into these productions by cast, crew and sponsors. Incidentally, BLT has new more modern stage lighting due to the support of the community. Your attendance makes such a difference for BLT to continue to increase the quality of productions.

“A Funny Little Thing Called Love” has five scenes in two acts enabling the audience to have an intermission to enjoy a refreshment, visit and catch a breath. It begins in San Francisco, then moves on to different casts and settings in Dallas, Honolulu, London and NYC. The common thread for all scenes is love and the full moon experienced as the globe turns. It is a roller coaster of fun. To say much more may give away the many surprises, so you must fill the car with family and friends and experience this gem for yourselves.

With so many scenes and each requiring separate casts the list of talent is long. Act 1 Scene 1, “Love Is On The Air,” which takes place in a television news room in San Francisco, is directed by Lee Moore and performed by Wendi and Ryan Case and Sydney Brister.

Act 2 Scene 1, “A Little Brit of Romance” shifts the venue across the Atlantic to a roof top café on the upper west side of New York. Shelley Harrigill directs and Rich Huffstutler, Heather Thurgood Wilmoth, Lee Moore, Kayla Becker and Scott Morrison deliver the script magnificently. You may need to bring an oxygen bottle to survive the laughter Lee Moore generates in this hilarious scene.