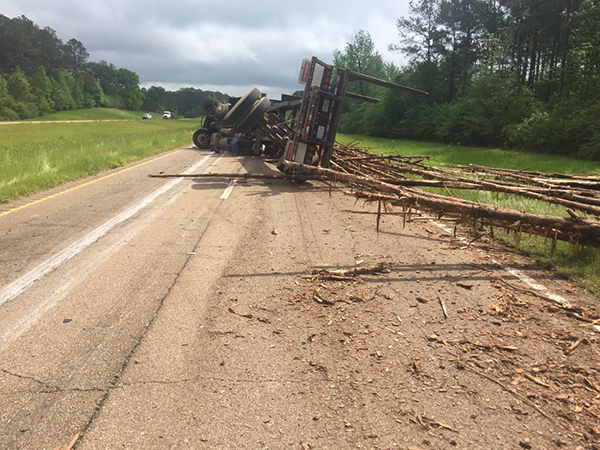 No injuries were reported when a log truck overturned on Hwy. 84 E. in Lawrence County Thursday morning.

Troopers responded to the scene near the Lincoln-Lawrence County line at 10:35 a.m. Thursday on Hwy. 84.

Mississippi Highway Patrol Troop M Spokesman Cpl. Brandon Fortenberry said James Durr, 66, of Brookhaven was traveling eastbound on Hwy. 84 when he lost control of the 18-wheeler hauling logs. The truck overturned in the roadway, spilling the load of logs onto the shoulder of Hwy. 84, he said.

The truck came to rest on its side in the eastbound lane of Hwy. 84, Fortenberry said. The driver had no injuries and was wearing his seatbelt, he said.

Eastbound lanes of the highway remained closed while the scene was cleared. Traffic was diverted onto James Carr Road to New Zion Road.

The accident is still under investigation.