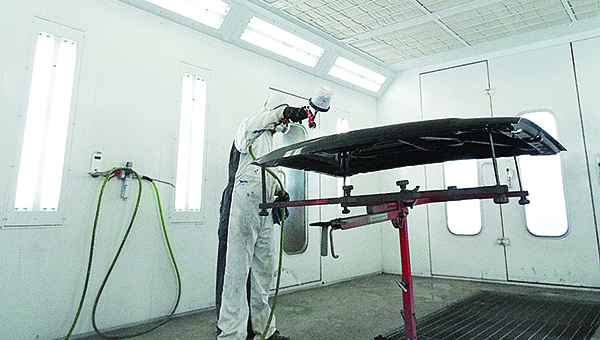 Griffin and Jon Thames have been working to build a new collision repair business in Brookhaven. The business — GT Collision & Accessories, located on 1354 Hwy. 51 N — has been open since January, but Griffin said in February the company came out with paint guns blazing.

“He and I talked about it a couple times over the last two years probably, back and forth,” Griffin said. “I said, ‘you know what, let’s do it.’

“This land, we got to talking about how awesome it would be to have it right here. So I got to calling, and I got the land deal done. Then we got some plans drawn up. We ran with it. We didn’t waste no time.”

Thames said he’s been working in collision repair since he was 19. He started out in Porter’s Body Shop just cleaning cars.

“I started watching them,” Thames said. “I said, ‘Hey can I do that, can I help you with this?’ I’ve always been passionate about cars. Always.

“It’s just in me,” he said. “I mean, I’ve been thinking about building me an apartment right up above this room because I just stay out here. I don’t want to leave.”

“He loves it,” Griffin said. “He’s probably one of the most passionate about his work that you’ll ever meet.”

Thames said the inspiration for opening up his own shop came from his friend, the late Joel Pace.

“He was a really good guy,” Thames said. “I think he’s looking down on us because that’s something that he wanted for me, and I know he would want it for Lance, too. I would have given anything in the world for him to still be alive.”

Starting a new business is never without its challenges. Thames said there was no shortage of customers — he’d brought in plenty from the start. But severe weather would follow the company’s opening, something Thames described as both a blessing and a curse for the business.

Thames said they had to find the talent to handle the influx, quickly.

“We had some just come and go because they just didn’t cut it,” Thames said. “We recently hired Chris Porter. It was a very good choice; I wish we’d done it awhile back.”

Thames and Griffin both said their partnership is backed by a strong friendship, and they want to foster a positive environment in the workplace.

“We want a good, strong relationship with all of our guys,” Griffin said. “We want to be good, efficient and for everybody to enjoy it.”

“I know how most people feel about their cars,” Thames said. “It’s a life-changing thing to buy a new car and to see it get tore up.”

“I’ve learned that that person bought that vehicle and possibly pays notes on that vehicle,” he said. “When I fix it, I’m going to fix it as if it was mine, and I’m going to pay the notes on it because that’s how it should be.”

LCBA to celebrate Day of Prayer

The Lincoln County Baptist Association will celebrate the National Day of Prayer on Thursday with a gathering on the Lincoln... read more