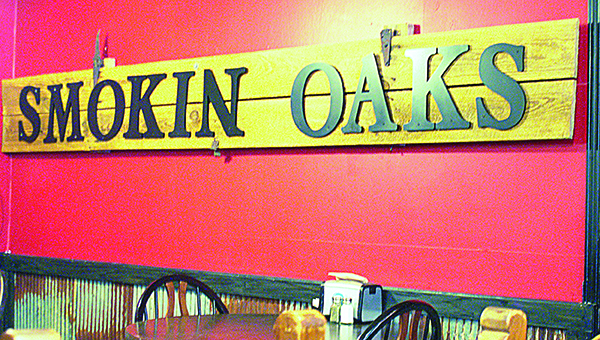 People heading to Lake Lincoln State Park now have a chance to get a bite to eat. The Smokin’ Oaks BBQ & Steakhouse restaurant opened May 17.

Owners Brandon and Kelly Stewart said their first week in business has gone beyond expectations, and they currently looking for a bigger crew to meet demand.

“I want to make sure everybody is served correctly,” Brandon said. “I had some guys hired, but some things came up and they couldn’t make it. But I’ve got a real good cook back there now. We’re doing it right.”

The smoker Brandon has been using wasn’t big enough for the business of the Smokin’ Oaks, so he had one custom made. The 18-foot long smoker was christened “The Rougarou.” Brandon describes it as an “old mean creature” of Cajun mythology, but it was also the nickname for one of Brandon’s trucking buddies.

“I had it built, and I seasoned it the weekend before last,” Brandon said. “So we’re ready to cook.”

Kelly said they’ve been married for 20 years, and Brandon has wanted his own restaurant for most of them. For awhile, he catered on the side and was a saute chef at Mitchell’s.

“We hope we can be a family Christian restaurant here and serve the public and have great food for everybody. I hope everybody comes to see us and tries out the food,” she said.

File photo / The Brookhaven Farmers Market is scheduled to return downtown on June 3. The annual Dairy Day will... read more