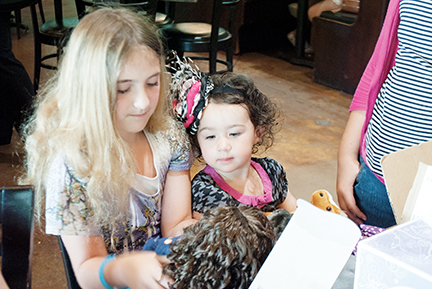 Photo by Aaron Paden/Arabella Jackson plays with Kabella Dubose and Dubose’s new doll on June 2 at Broma’s in Brookhaven.

Kabella Dubose is a little girl with a big heart.

Shortly after her birth, Kabella was diagnosed with Ebstein’s anomaly, a rare heart defect that her mother Rebecca Dubose said affects only one in 300,000. It can be a dangerous disease because there is no general surgery to fix it. A surgery has to be redesigned for each case. Many can’t be fixed at all and require a heart transplant.

“It causes the heart to enlarge,” Dubose said. “In most cases, there’s usually three to four steps to the surgery. Kabella was lucky and didn’t need a transplant.

“The more it works, the bigger it gets,” said Dubose, who works as a wound care technician at King’s Daughter Medical Center. “Because her tricuspid is displaced, it made her atrium really large. The atrium, the bigger it gets, it takes up the space of the ventricle. Her right ventricle has turned into her atrium because they’re all up together. So basically she doesn’t have a right ventricle anymore.”

“She was born on a Thursday morning and we didn’t know about it until she was about 13 or 14 hours old that she had anything wrong with her,” she said.

Despite the medical difficulties, Dubose said Kabella is a happy, outgoing child, and lucky, her condition has not been as bad as it could have been.

“We don’t get to do a lot of outside stuff,” she said. “She loves outside. She loves horses and stuff, but if she gets hot she gets out of breath. But she knows how to manage herself.”

Dubose continued, “Like most 2-year-olds, she can get pretty wound up. Activity gets to her after awhile, but she does pretty well. Can’t complain too much, she’s been blessed.”

Arabella Jackson, a 10-year-old from Brookhaven, heard about Kabella from a mutual friend at her dance class and wanted to give her a Truly Me Doll from American Girl. She met the family June 2 at Broma’s Deli to present her gift.

The goal of the doll is to give Kabella a companion — someone who looks like Kabella and who is experiencing the same disease. The doll has a heart monitor, just like Kabella and can visit her with the hospital.

“They have the same disease and everything, so they can have somebody to be there with them,” Ashley Jackson, Arabella’s mother, said.

LC Board of Supervisors approves May dockets

The Lincoln County Board of Supervisors met for 30 minutes Thursday to go over the May dockets. Supervisors Nolan Williamson,... read more