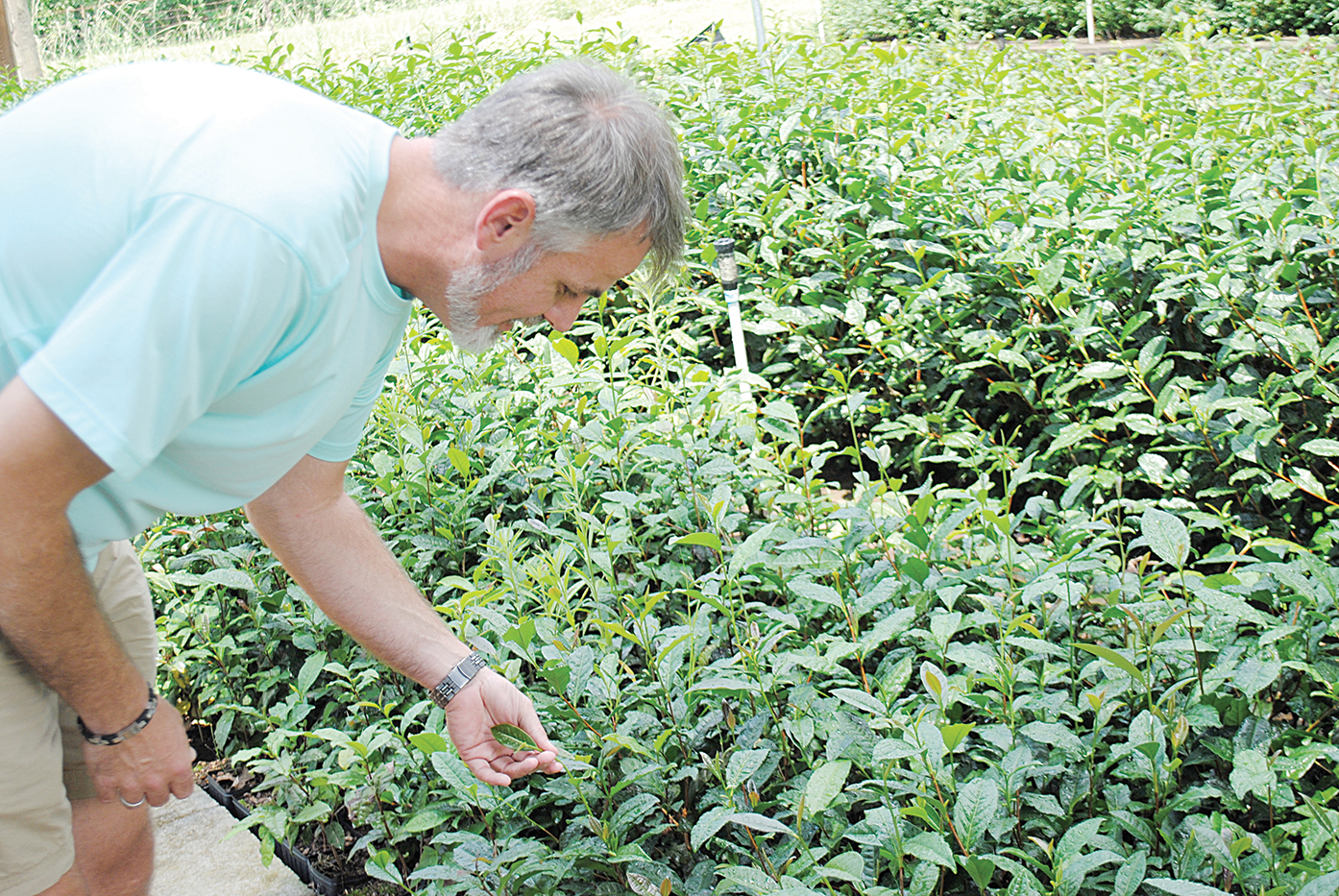 Photo by Aaron Paden/Jason McDonald examines the tea plants on his farm Friday. The camellia sinensis is an evergreen that takes years to fully develop into a viable crop.

Just down East Lincoln Road is the Great Mississippi Tea Company, a business that could be the first of its kind in the Magnolia state.

It’s situated on 289 acres of the homestead of Seymour Boone, the great-nephew of pioneer Daniel Boone, according to the company’s website.

The commercial tea business was founded four years ago by Jason McDonald, a descendent of Boone, who started his adult life studying law. But he found his passion in nature as a timber farmer. However, when a hurricane struck, McDonald decided to find a better crop to grow.

“Katrina came through and destroyed most of our timber. We were looking for a crop that would sustain winds and hurricanes,” said McDonald, a Hammond man who graduated from Millsaps College in 2001 with a degree in religious studies and also attended law school at Mississippi College School of Law.

When he visited the Charleston Tea Plantation in South Carolina, he found that tea required high heat and humidity, along with an acidic soil. He spoke with Mississippi State University Extension Agent Rebecca Bates and hired a consultant. McDonald had found his crop.

But just like waiting for a cup of steaming tea to cool, growing the leaves takes patience.

The camellia sinensis is an evergreen that takes time to reach an adequate level for tea production. McDonald has had a plot going for four years now, and he’s hoping that by next year it will be ready for full-scale tea production.

McDonald was like most Southerners who brew their sweet tea through a bag and pour it on ice. Growing his own tea has given him a greater appreciation for other varieties.

“This is high quality and high grade,” McDonald said. “What we’re used to is commodity tea in a tea bag. It’s a really harsh tea which is why people flavor it or they put sugar in. These teas have flavors all on their own — all naturally. That’s the art of it.”

“You’re going for the new growth, which is two leaves and a bud,” he said. “That’s what you’re making into the tea. Out of one plant you can make black, green, oolong, yellow, white — all the teas can come from one plant.”

The great variety of teas is made by introducing a varying level of oxidation through different preparation techniques. White tea undergoes very little processing, while black tea is very heavily oxidized, producing a strong flavor. Green tea, which is commonly used to make iced tea in the United States, sits somewhere in the middle.

The Great Mississippi Tea Company not only wants to serve great tea, owners want to be ethically sustainable through labor practices and using business practices on the farm that will reduce chemicals and toxin levels in tea, according to the company’s website. They are practicing sustainability without the use of herbicides or pesticides and have begun the process to be certified USDA organic.

Because of the limited quantity of tea that can currently be produced at the farm, McDonald said it’s likely that all of it will go to a single vendor. Since it’s too early for purchase he’s planning to announce a vendor at a later date.

CRYSTAL SPRINGS (AP) — Rescuers today recovered the body of a second man who disappeared in a landslide at a... read more