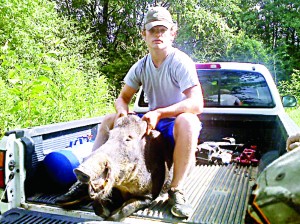 A woman on Hog Chain Drive woke up to bacon last week.

That wouldn’t be too unusual except the bacon was still alive and it was rooting around  on her front porch.

“I heard something on the porch,” Edna Womack said. “I looked out the door and it was a gigantic wild boar on my front porch, knocking over my porch furniture.”

It was about 8 a.m. Wednesday in Bogue Chitto, a community on old Hwy. 51 that used to link Memphis to New Orleans. Womack’s neighborhood is near the Bogue Chitto River, an area known to be home to several wild hogs.

“He’d knocked the bag off the chair,” she said, recalling how it had torn open the bag and was gobbling up the corn. “It was quite content.”

Neighbor Laverne Phelan came knocking on her back door to tell her about the intruder. “She asked if I wanted Mike Hart, my other neighbor, that was parked outside in my driveway, to shoot the hog while preoccupied eating away at the corn,” Womack said. “I didn’t want Mike to shoot and possibly damage my house. The hog then grows tired of eating the corn and starts roaming around my front yard. Then it gravitated toward the end of the driveway.”

“Miss Laverne says, with much thrill In her voice, that we have not had this much fun on Hog Chain in a long time,” Womack said. “She said that she would just climb on top of the vehicle, if the hog charged after her.”

The 200-pound hog eyeballed her coop with 10 hens and a rooster and laid claim to it.

“My Great Pyrenees, Guinevere, came galloping home and I commanded her to go and get it,” Womack said. “She ran to the hog and barked continuously until Mike Hart came with his pistol.”

Hart ran out of bullets after four shots, but as he ran to his truck to get more, the animal staggered and fell over. “To ensure his death, Mike fired one more blow to the beast,” she said.

But what to do with a huge, dead hog?

Another neighbor, Bubba Freeman, came to see what the commotion across the street was all about. Womack suggested Freeman call his brother-in-law, Curtis Davis, about butchering the hog.

“He was thrilled to accept it and agreed when he cooks it to save me some to sample,” she said. “Miss Laverne said that it took a wild hog to bring the Hog Chain Community together.”

Though she’s lived there since 1998, this was the first time Womack had seen a wild hog on her property. Womack said her neighbors tell the story that the area gets its name from a practice by farmers in the early 1900s who’d chain their hogs to railroad tracks whenever the Bogue Chitto would flood so the hogs would stay on higher ground and not drown. Sometimes the trains would hit the animals and the farmers would get more money from the railroad company than from the market.

Around the mid to late 1920s, an independent school bus driver named Pearl Summers painted Hog Chain on the side of his bus to indicate the region where the children lived. “When 911 came and the streets all had to be named, the community decided on the name Hog Chain Drive,” she said.

Womack and Phelan plan to display yard decorations of hogs to commemorate their adventure.

She warned the animals, who were first introduced in the United States in the 1500s by the Spanish explorer Hernando DeSoto, can carry diseases and can be aggressive when their young are present.

MSU Extension service suggests trapping as the best way to rid property of the nuisance animals. Details are available at msucares.com.

Photo submitted/Circuit Court Clerk Dustin Bairfield reads out a verdict Thursday of not guilty at the conclusion of the two-day... read more