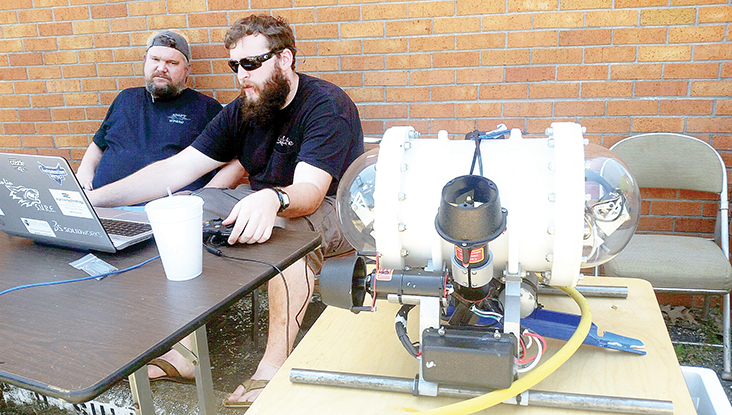 Photo submitted/Charles Miles and Reginald King work on computer set-up prior to operating the Seawolf V. Pictured is the ROV in its early stages of assembly.

It will be held at the National Bouyancy Lab at the Johnson Space Center. There will be 32 teams, and according to Co-Lin’s Kevin McKone, a physics and engineering instructor for the college and co-founder of the team, only about half of them are from the U.S.

“There are teams from Russia, Egypt, China, Hong Kong and Canada,” McKone said.

McKone said the team was founded about five years ago.

“Carey Williamson and myself started it,” he said. “We were looking for STEM related activities for our students and we got an invitation to go to Monterey, California to start the program. We spent two weeks learning how to build underwater robots.

“Carey’s specialty was electronics and mine is physics. We recruited our drafting and design instructor and got support for several instructors down here. We entered our first competition five years ago in Orlando, Florida.”

The team made news last year when it placed fourth internationally, and McKone said businesses have hired students from the team to run remotely operated vehicles in industry.

“We have a company down in Robert, Louisiana — Seatrepid — that’s been really supportive of the work we do,” he said. “During the Macondo Oil Spill down in the Gulf of Mexico, that company was one that was tasked with cleaning that spill.

“How do you cap it? How do you stop it? These ROVs can be tools that can be used to stop oil. There’s also a lot of work being done with fiber optics and trying to monitor ocean temperatures and currents. These ROVs are used to install fiber optics underwater.” 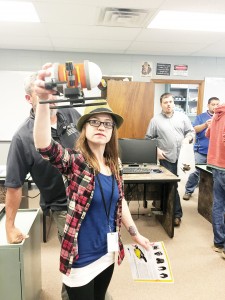 Photo submitted/Lauren Westrope displays a model of the Seawolf V to a group of students touring Copiah-Lincoln Community College Career and Technical Education.

The team involves a number of programs throughout the school. The team forms an entire business around the robot, with a CEO and ad department. The students have been responsible for doing media outreach, and McKone said there’s plenty of opportunity for students outside of STEM classes to get involved.

“We have English majors, accountants and graphic artists that have to write technical reports,” he said. “They have to do media outreach. It’s a large project. Part of it is they had to write up a press release. They will have to participate also in a technical presentation where they will present the robot to judges from the underwater robots industry.”

This year, the Seawolf V ROV will be tasked with surveying coral and oil spills in a pool where astronauts often do their training.

It’s a big challenge — especially with the underwater nature of the project — and McKone said they have had technical issues this year. But no matter how the robot performs, he said he’s proud of his students.

“Our ad department has done a great job. Our tech report looks really good and we’ve got a really good robot,” he said. “We have a really solid team, but anytime you’re dealing with technology, you just don’t know. I’m very proud of what the kids have done this year.”