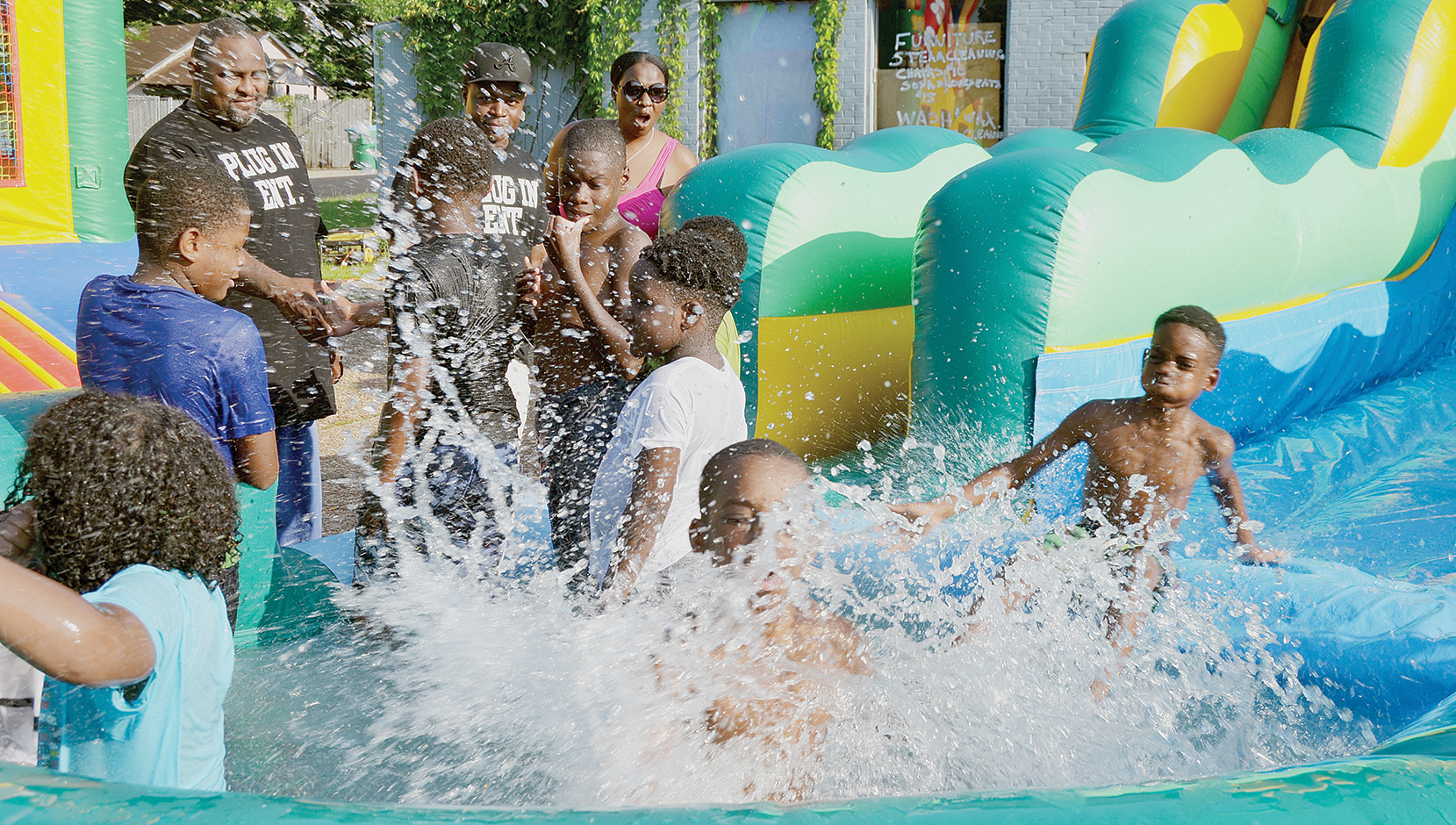 Photo by Donna Campbell/Triston Allen, 9, the son of Samantha Allen of Wesson, makes a huge splash as he slides into the inflatable pool set up in a business parking lot at the corner of Avalon and East Monticello streets.

A Brookhaven businessman is hosting pop-up community get-togethers around town to encourage fellowship among neighbors.

Tony McGee, 39, of Plug In Entertainment, has organized two events so far that have attracted dozens of adults and children for free food, music and activities.

He said he’s trying to bring communities within Brookhaven together by hosting fun, family-oriented events.

“They don’t have anything to do,” he said.

McGee, with help of family, friends and business donations, is organizing the celebrations at various locations around Brookhaven. The menu and activities change based on the donations, but the premise remains the same. They set up tents and tables and usually some sort of inflatable play area for the kids.

While the kids play, the adults get to fellowship as the food cooks. Then everyone enjoys a meal together.

On Thursday, at the corner of Avalon and East Monticello streets, the dozens of  children who came took turns careening down a giant inflatable slide into a kid-filled pool of cool water. An inflatable jumper was also set up, but the youngsters avoided it. Too hot outside to be jumping, McGee reasoned.

The adults listened to a DJ play music while waiting for fried fish and a rich soup of various meats called a junk pot to finish simmering.

McGee is planning similar events next week, one on Brignall Road and another on Union Street.

“The kids have been having so much fun,” said Latashra Newton, who was helping at the event with her aunt, Carolyn Taylor.

“We thought that was the best idea in the world,” Taylor said.

Newton said the event is a good way to create community unity.

“The town needs it right now, just to bring everyone together, to see the kids smiling. You couldn’t ask for anything better tonight.”

She said McGee has received a lot of support from family and friends.

“He’s just trying to get the momentum going,” she said. “He’s bringing that lovin’ vibe together. The whole community has really come in and embraced this. The community is really stepping up.”

The location and dates for the free events are announced on the Plug In Entertainment Facebook page. They usually start setting up about 2 p.m. They keep it open until the children get tired, Newton said.

Radio operators plan to ham it up at field day

Photo by Donna Campbell/HAM radio operator Homer Richardson adjusts his settings to talk to other radio enthusiasts in other countries.... read more