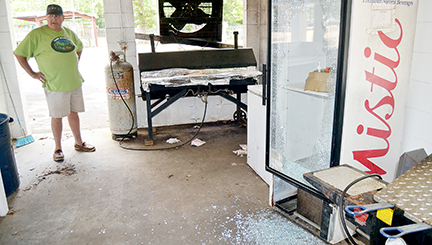 Photo by Donna Campbell/Exchange Club President Roger Leggett looks over damage to one of the coolers under a food pavilion at the Exchange Club Park fairgrounds Friday.

When members of the Exchange Club of Brookhaven visited the fairgrounds last week to get the place ready for the annual fair, they found broken glass from florescent lights and cooler doors littering the pavement.

Since the fairgrounds, located at Exchange Club Park, is surrounded by an 8-foot fence, topped with barbed wire, it was an unexpected and disappointing find.

It was the second act of vandalism club members have discovered this month.

They didn’t file a police report two weeks ago when they found a can of paint had been poured out near one of the pavilions. The culprit had slipped over the fence to get in, club president Roger Leggett said.

Club member Mike Walley discovered the latest vandalism Thursday night when he came to prepare food for the club’s monthly meeting. Everything was fine when he’d been by the night before, he said.

This time, glass cooler doors had been busted and fluorescent lights were shattered on the midway.

He called Leggett and they notified police.

Leggett suspects the damage was caused by bored teenagers, or possibly even younger children, wrecking the property for misplaced fun.

It’s trespassing and vandalism, and they are perplexed at how to stop it.

With the annual week-long fair set to start July 30, they’re worried the preparations they’ll be making in the next few weeks will be damaged, or worse, destroyed.

The Exchange Club Fair funds the Brookhaven service organization and allows them to maintain the 14-acre property, as well as provide scholarships and donations to charitable causes.

“Everything out here will be boomed out and ready to go,” Walley said. “I just hope they don’t come out and vandalize it after we get it all put together.”

The fence was installed about six years ago when vandalism at the fairgrounds was a routine problem. It’s been a deterrent for years, with little or no reports of damage, Leggett said.

But apparently, it’s not stopping anyone anymore.

“They’ll grab the barbed wire and pull it down and climb over the fence,” Walley said. “The week before, someone crawled under the fence.”

“Before they put that fence up, they used to have to take this thing down every night and put it back up every morning,” he said. “They (vandals) would come in here every night and they’d bust every light down through there and every light in there.”

Leggett walked through one of the three pavilions Friday afternoon with the sound of glass from the cooler doors crunching under his feet. The doors on three coolers were damaged.

Fortunately, only one pane in each of the insulated glass doors was broken so they believe the coolers are still usable, he said.

Several 8-foot fluorescent overhead lights were also removed from two pavilions and shattered on the concrete in the midway.

“They took lights from that building and took lights out of there and ran down here with them to listen to them pop I guess,” Leggett said.

Most of the club’s valuable items are kept locked away in a building with steel doors.

“We’re just hoping they don’t come in here once we start getting everything together for the fair,” Walley said.

They’re planning to add overnight security, which will cut into their profits from the fair. “It’s a major expense for us to do that,” Leggett said.

They usually have security during the day, and also at night until the fair closes at 10 p.m.

To hire a security guard overnight will cost an additional $1,500.

That’s money that won’t go to scholarships and charities.

Exchange Club of Brookhaven regularly raises money for child abuse prevention and scholarships. They also run rides for the Make A Wish Foundation, American Cancer Society’s Relay for Life and other causes.

Leggett and Walley are disappointed.

“This is something that we try to do for the community and then to have someone (do this), just for the pure enjoyment of tearing something up, that’s the world we live in today,” he said.

“It’s the Exchange Club, but this is the community’s. Everything we do out here is to help the community,” Walley said. “We don’t keep any money, except enough to keep this thing going. The rest of it we give away.”

Club members are perplexed as to what to do.

He said he appreciates the patrols by the Brookhaven Police Department in the park and hopes that will be enough.

Brookhaven Police Chief Bobby Bell said officers will be on the lookout for offenders. ““We take pride in trying to keep an eye on all our citizens,” he said. “Business and properties, both private and public, we’re going to continue to do these things along with all the others that we do, to make our city a better place to live.”

In the business, he’s known as the water man. Until recently, Bill Manduca has lived in Wesson and worked as... read more