City sees an increase in vandalism 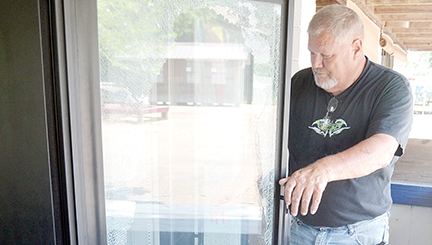 Photo by Donna Campbell/Exchange Club member Mike Walley discovered the park had been vandalized June 23 when he came to prepare food for the club’s monthly meeting. Glass doors on three coolers had been busted and and several fluorescent lights were shattered on the midway of the fairgrounds. Brookhaven Police Department has stepped up patrols in the park.

There have been many cases of vandalism reported in the past two weeks — including the Exchange Club Park, where vandals smashed fluorescent lighting and glass cooler doors despite an 8-foot fence topped with barbed wire surrounding the property.

However, many incidents cataloged as vandalism in police reports are less clear-cut, according to Capt. Clint Earls with the Brookhaven Police Department.

Of the three incidents listed in Wednesday’s reports, one was a domestic violence incident, the other appears to have been damage from a lawnmower and the third was a fence post that had been damaged for unknown reasons — potentially a vehicle collision.

“Most of them are where damage has been discovered and you don’t know the root cause,” Earls said. “It’s classified as vandalism until we get information indicating otherwise.”

Earls did say that cases of obvious vandalism increase during the summer months while children are out of school.

“We encourage the parents to be aware of the activities their children are involved in,” Earls said. “Try to find them a structured activity over the summer — something to keep them preoccupied during their down time. Be aware of where they’re going, especially during the night hours.”

Earls said there was no apparent pattern to vandalism cases — they can happen during the night or day.

For the Exchange Club case, which was reported June 23, Earls said the club had done everything that can be expected of them to deter vandalism, and the BPD steps up patrols when there are reports. But Earls said the park presents a unique challenge for the department.

While a portion of the park that contains easily-vandalized equipment is cordoned off with a fence except during times of an event, the rest is open to the public and it’s not unusual to see civilians spending time in the park.

“We make it a point to stop and talk to people — get their names and info if it’s not blatantly obvious what they’re doing over there,” he said. “Some people, it’s easy to tell. If they’re sitting over there with a Wendy’s bag, well, they’re just out there eating lunch. There’s a lot of dynamics in play and you’ve got to use common sense in how you approach certain things.”

Police: Take the fireworks out of town

It’s a fun tradition to shoot fireworks on Independence Day, but it’s important to do so where it is safe... read more