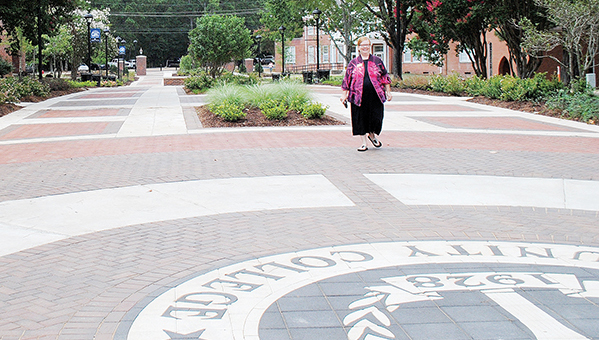 The pedestrian corridor at Copiah-Lincoln Community College is ready for students and staff to start stepping.

Co-Lin President Ronnie Nettles said the project started on the very first day of class in the fall of last year.

“Our students had to walk all the way around it just to get to the library,” Nettles said. “The contractor went on to tell me how incredibly pleased he was with the way students responded to them and their work. There was never a disruption. They were always excited to see what was going on with the project.”

Nettles said that, along with improving the school’s aesthetics, the new walkways comply with the Americans with Disabilities Act, making the school more accessible to all students, staff and visitors.

Planning for the project began four years ago.

Co-Lin Director of Facilities Planning Jeff Posey wrote the grant for the Mississippi Department of Transportation and WGK engineered the project, which cost about $1.2 million. The grant covered about $1 million.

“It really transformed our campus,” Nettles said. “It’s staggering. It makes a huge difference in how folks are going to feel about our campus.”

The corridor cuts through the center of the Co-Lin campus. Trees shade part of the walkway, and it also features seating areas for students.

“It gives them a very nice area in the center of our campus to enjoy,” Nettles said.

Nettles said that, while the design is new, it also maintains old features that are recognizable in the school, including a restored entrance that is reminiscent of the campus in the 1930s.

“Even though it’s a new improvement for us, it maintains some of those older features so people who were here 10, 20, 30 or 40 years ago will remember,” Nettles said.