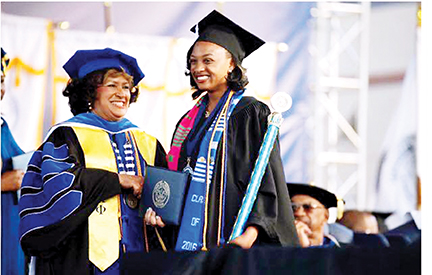 Orionna Brumfield’s hopes and dreams are balanced on hard work and determination.

Her foundation was the first goal she ever had — a college education.

“My main focus in school, whether it was high school, community college or university, was to make good grades so I could pay for school. I knew my parents were not going to be able to pay for me,” she said. “I just knew going to college was going to give me a better future. I’m just so thankful that God puts things in my path to become a part of my goal.”

Brumfield is the daughter of Dontray and Jenice Williams of Brookhaven. She graduated from Brookhaven High School with honors in 2012 and was followed three years later by her baby sister, Shanna.

“Our mother was very strict on us, but it was for a reason,” she said. “Now that I’m older, at the age of 22, I appreciate the strict rules that we had to go by. Both my sister and I are following pretty good paths, so I’m very grateful for that now.”

The BHS trumpet player went to Hinds Community College on a band scholarship.

She actually missed graduation from Hinds because the band was performing in Normandy, France at the same time as the school’s commencement ceremony. However, the band director arranged for the graduating seniors to participate in a special graduation ceremony after their performance, so Brumfield and the others received their diplomas while standing on Normandy Beach.

A Phi Beta Kappa transfer scholarship gave her a full ride to Jackson State University, where she majored in journalism and minored in theater. She graduated in April and was the first valedictorian of the college’s newest department, the School of Journalism and Media Studies.

Brumfield’s second graduation was special, too. First lady Michelle Obama was the speaker at the JSU commencement.

Her good grades and hard work put her through college debt free.

Now Brumfield is back in Brookhaven, living at home with her mom and stepdad, and her sister and niece, Alexis, while she works for an online public relations firm.

She initially thought she’d go into computer programming, but was intimidated by the number of math and science credits required for it. A writer at heart, she chose journalism as a tribute to one of her mentors, Mississippi native Oprah Winfrey.

While she loves journalism, it was during the summer of her junior year that she was exposed to the film industry and caught the non-acting bug. She discovered a love for being behind the camera.

During the rigorous, two-week film course in Los Angeles, she studied with actor and director Tim Reid (Simon & Simon, Sister Sister, WKRP in Cincinnati). “I fell in love with it,” she said.

She went back to JSU and started an organization, Students of Cinema. Through that group, she landed her first film job, working as a script supervisor on a movie filmed in Jackson last year called “God’s Prayer.”

She just recently worked on another movie filmed in Jackson called “The Base.”

She’s waiting anxiously for both films to finally make it to the big screen.

Besides writing, reporting and public relations, she also dreams of producing her own content for movies, TV and stage. She wants to eventually own her own production company, OnlyO.R.I.

“I’m only 22 and sometimes when I tell my dreams to people and explain what I want to do, people are like, ‘Don’t dream too big. You need to pace yourself,’” she said. “I do believe in pacing myself, but I don’t want to talk to people who make it seem that it’s not possible.”

Brumfield looks at everything as an opportunity to grow and become a better person.

“I think that’s why I’ve gotten where I am in life today,” she said. “You just never know what you’re going to learn from it, what you’re going to gain from it. What you’re going to do next. When I look back on what has happened since I’ve graduated from high school, it’s nothing but a thrill and determination for a girl who really didn’t know where she was going, but she wanted to go.

“I don’t want to forget how far I’ve come and how far God has lifted me to where I am today. It might not be a lot for some people but it’s a lot for me. And I just want to continue to go further.”

She wants to eventually establish a foundation in Brookhaven that will help others like herself attend college so they have the opportunities to pursue their dreams.

Another person she admires is William Kelly, who she met at JSU.

“He doesn’t know but he has a huge influence on me because of his work ethic,” she said. “There are people that you meet, and you see their work ethic, and you see how talented they are. You just know they’re going to be something special. He’s one of those people that I look at and say, ‘You’re going to be something special.’”

Brumfield believes that anyone can accomplish their goals if they just believe in themselves and work hard.

“Just showing people that no matter where you come from no matter, where you live or what you’re doing, that does not determine your future unless you let it,” she said. “Unless you let your circumstances and the things you’re going through determine it, that’s the only way it controls it.

“You have the power to become anything you want to be and I knew I had to make it. But I have enough faith in God to know that I’m going to make it, to know that I’m on the right path at this moment to be somebody special one day. And that’s my ultimate goal, to be something that someone remembers and they can say good things about because I cared for my community and I followed the path that God created for me.”

Wesson will soon be bidding for a $250,000 paving project, according to mayor Alton Shaw. The money comes from a... read more