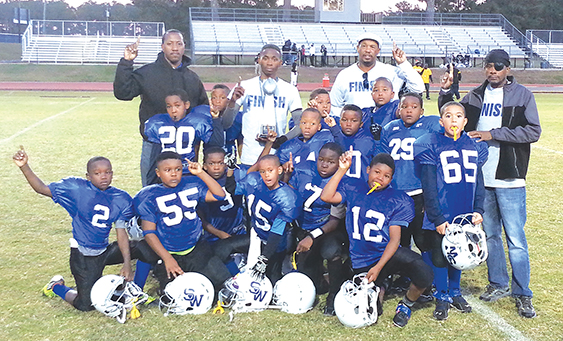 Photos submitted/The Southern Wildcats may be forced to disband if they do not reach their fundraising goal.

The Southern Wildcats have seen huge successes since they met for their first football practice in 2012. But running a football team — especially one that travels — costs money. If the team isn’t able to meet their fundraising goals, they can’t operate.

The Southern Wildcats serve about 78 children between the ages of 6 and 12. Coach Jason Dixon said coaches teach the kids a lot more than just football.

“We give them life lessons through coaching,” he said.

Dixon said they strive to focus on three things — faith, family and education.

“We try to teach them that undisciplined youth become unemployable adults,” he said. “We teach them to strive to be the best at anything they do and keep them off the streets.”

According to the Southern Wildcats’ Facebook page, the football club is a “family-based, youth-oriented sport organization designed to help build and shape today’s young men and women into strong, considerate, contributing adult members of our community. We are built on faith, family values, and education. And along the way they get to learn the fundamentals of football and develop life long knowledge.”

The team also travels to play games, and they’ve acquired plenty of wins over the past four years. Back to back, in 2014 and 2015, the 6- to 8-year-old division won the TNT Youth Football League Super Bowl championship at Southwest Community College and Natchez High School. In 2015, the 9- to 10-year-old division also made it to the Super Bowl.

Dixon said he likes to make the kids feel special while traveling to build their self esteem.

“You get a public escort and make them feel like they’re high school and college kids,” Dixon said.

The coaches are also certified with the Heads Up Football program, where they learn safety precautions like how to recognize concussions or how to perform cardiopulmonary resuscitation.

Hosting the games comes with a price. The team has to pay for referees, to use the field and for field insurance.

Dixon said the team has only been able to secure one sponsorship, and their gofundme account at www.gofundme.com/kwwd5cys has only received $95 toward their $2,500 goal in the past three months.

He hopes they won’t have to end the program.

“There would be a lot of disappointed kids,” Dixon said. “Some of the kids that don’t have dads at home, they look up to us. A lot of the parents look up to us.”

Along with donations to the gofundme account, Dixon said potential sponsors can reach him at 601-455-6575.

Two teenagers have been charged with four counts each of auto burglary and police are looking to see if they’re... read more