Bridget London Hall’s father: ‘If he killed my daughter, he could kill somebody else’ 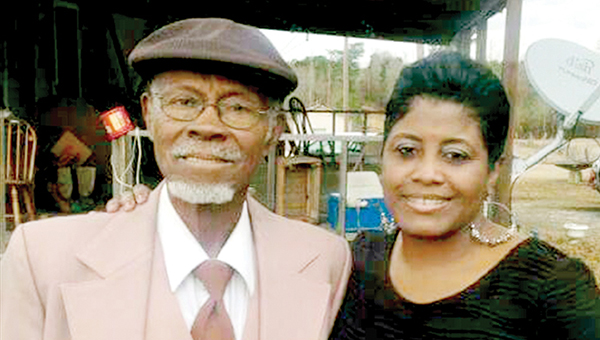 Photo submitted/Marshall “Sko” London Sr. (left) and his youngest daughter, Bridget London Hall, are all smiles in a picture she posted on Father’s Day in 2014, a year before she was killed.

The father of a woman shot to death in front of her children wants to know why his daughter died.

Bridget London Hall, 43, was shot multiple times at close range in her home on Vivian Merritt Street on July 6, 2015.

It was a Monday night and she was at home with her kids.

Her shooting came scarcely 24 hours after the Sunday night shooting and death of Kelcay Anthony Humphrey, 25.

According to a March 19, 2016, report in The Daily Leader, a bystander on the scene the morning after Hall’s murder said the shooting happened around 11 p.m. Monday night. He said he saw two men fleeing the scene headed toward North Jackson Street, one riding a bike and one on foot.

Sharon London, of Birmingham, believes her sister’s death was a warning to someone else. She thinks she died in retaliation for Humphrey’s death.

“There was a murder that took place that Sunday night. That murder prompted, I’m assuming, a retaliation,” she said. “According to what people are saying, that murder that transpired on Sunday, kind of started whatever with her. But she was no way involved in that at all.”

Marshall London suspects his daughter died so she wouldn’t talk about the other murder.

“I think she knew something about that case,” he said. “I figured they thought they’d get her out of the way so she wouldn’t talk.”

Her father wants to know the truth before he dies.

“I’d like to know what happened,” he said. “If he killed my daughter, he could kill somebody else if he’s out there.”

London Hall was the youngest of 12 children born to London and his late wife, Inez.

Her 11 older siblings considered her their baby, too.

She had the voice of an angel and her mother, her father said. She started singing at Mt. Zion Baptist Church when she was just 3 or 4 years old. That was when they lived in Bogue Chitto, where her father was a farmer. After the Londons separated, she sang at Damascus M.B. Church in Brookhaven where her mom and siblings moved.

Her musical roots from her mom led her to singing at weddings and funerals throughout her life.

She was popular in high school, where she was a cheerleader. She was football homecoming queen her senior year.

“She was well loved,” Sharon London said. “Not just by her family, but by the people here.”

She had lived in Memphis, working and raising her two youngest children, but moved back to Brookhaven a year before her death so she could be near her older children, who didn’t move with her to Tennessee.

She was working as a phlebotomist at a Brookhaven doctor’s office.

“Her children were here. My daddy was here,” Sharon London said.

Sharon London was living in Birmingham the night her sister was gunned down. She’s pieced it all together through various accounts to the point she feels like she watched it all happen.

London-Hall was at home on one sofa, watching television with her 14-year-old son, who was on the other sofa. Her youngest daughter was in her bedroom. Her older daughter was outside in the driveway talking to a friend.

There was a knock at the door around 11 p.m.

“She answered the door and whoever started shooting,” she said.

London said her niece and her friend saw the person walk by toward the door, but couldn’t identify the assailant, London said.

She said her nephew ran into the back of the house when the shooting started. “He’s thinking in his mind that he should have stayed and helped his mom,” she said. “But like I told him, being a mother, if she was like me, she was protecting him, and any parent would have taken a bullet for their child.”

“Just gunned down like a, I wouldn’t even say a dog, because I think the people had better respect for an animal than they would have had a human being, a mother at home minding her own business with her children,” she said.

She believes anyone who answered the door could have been shot, but she doesn’t think the shooter had the wrong address.

They believe they know who killed London-Hall.

London said she’s been told the person who pulled the trigger is now deceased, but she says there were others present that night who should be charged as accessories to the murder.

“There were several people involved in her murder,” she said.

She said she believes a woman drove two other individuals to her sister’s house that night. “Witnesses saw two males run from the scene,” she said. “The shooter and somebody else.”

She knows their names, but declined to give them publicly.

She wants to know why they chose to kill her sister.

“Her children watched her. They were there watching their mother on the floor,” she said. “People need to know how tragic that was. All I can think about is her children having to live with this for the rest of their lives. That’s not a good thing.”

Marshall London is pleading for those with information to call the police.

“Somebody out there knows something about it and won’t tell it,” he said.

Sharon London said they’ll never give up their search for the truth.

“We all feel like her keeper, not only in life, but also in death,” she said. “And that being said, we are willing to do whatever it takes to keep her. If it takes 20 years, it’s just going to take 20 years. But we will never give up on finding out who murdered Bridget. Sometimes it’s not even the who, it’s the why. Why? What did she do? She was our family, so you hurt us. What did she do that was so bad that you had to walk up to her door and gun her down?”

He urges anyone with information to call his office or any other law enforcement agency.

All of Mississippi’s state departments have begun feeling the tremors of the recent budget cuts approved during the 2016 legislative... read more