Local rescuer: ‘We’d hope somebody would do it for us’ 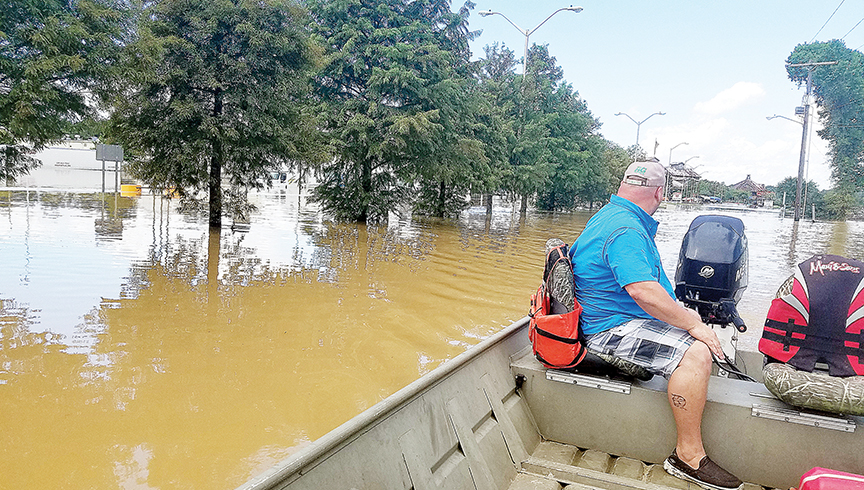 Photo submitted/Daryl Harveston, of Brookhaven, runs his boat along I-12 in Denham Springs Monday, headed toward the Bass Pro Shop. Harveston and several other members of the Brookhaven Moose Family Center helped rescue flood victims in Louisiana earlier this week. See more pictures at www.dailyleader.com.

Summer Harveston, a home healthcare nurse, saw the pleas for help on Facebook and answered the call.

Harveston and her husband, Daryl, as well as several other members of the Brookhaven Moose Family Center, loaded up their flat-bottom boats and headed to South Louisiana to help those who were trapped in their homes by the rising flood waters.

Their destination was Livingston Parish, one of the hardest-hit areas with about 138,000 people. Officials estimate that 75 percent of the homes were a total loss.

They drove down Sunday night, arriving at about 8 p.m.

“We just wanted to go down there and help people out,” she said.

She had seen posts asking for help from people with flat-bottomed boats.

“We all had one so we just loaded up and went,” she said.

And because she is a nurse, she loaded up with basic first aid supplies just in case her medical services were needed.

They motored their boat through subdivisions for hours, finally stopping around 5 a.m. “We were shining lights and yelling through windows,” she said.

Harveston tried to find one man in particular, whom she’d seen asking for help on Facebook. But she never did.

“I’d read a post on Facebook about an elderly man trapped in his house and he was a paraplegic,” she said. “He lived alone and didn’t have anyone. He couldn’t get out of bed and the water was rising.”

She said she thinks someone saved him. “I believe he was rescued,” she said. 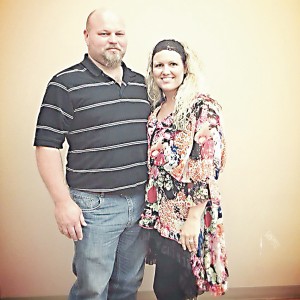 Photo submitted/Daryl and Summer Harveston, members of the Brookhaven Moose Family Center, took their boat to Denham Springs to help rescue people trapped in their flooded homes. About half a dozen members of the Moose Lodge, 1968 of Brookhaven, made the trip earlier this week.

Freddie Harveston, Daryl Harveston’s cousin, and also a Moose, was one of about half a dozen of the lodge members who made the trip to Denham Springs.

Harveston, of Brookhaven, went Saturday and Sunday and was headed back Tuesday afternoon.

“We saw it on the news and knew the people needed help so we decided we’d go help,” he said. “We’d hope somebody would do it for us.”

They helped people in Watson and Denham Springs.

Harveston said he’s heartbroken by the sadness he saw during the trip.

“One lady, we got her to dry ground but she wanted to go back,” he said. “She was worried about her animals, but when we went back it was totally flooded. Barely the roof was out of water.”

He saw people wading through the water with only the belongings they could carry.

He said the water came up quickly, trapping so many people in their homes.

“One woman, Kelly, told us that at seven she got up and let her little dog out,” he said. “And at eight o’clock, there was water coming into her house and within minutes she had two feet of water in her house.”

He saw people on roof tops, in dry patches of land and on top of their cars.

They were just waiting for someone to come by to rescue them.

At one point, he even rescued the rescuers.

The men went out in their boats to rescue stranded homeowners and “got into some current,” he said. “They were able to hold on to them until they got to dry ground.”

Harveston had never seen floodwaters in person before. The experience has changed him.

“You look down below you and you might see a red Tahoe or a white Nissan under the water,” he said. “I can’t describe it. The news you see, it’s nothing. It’s so much worse than that that it’s unreal.”

Harveston took 30 cases of water with him Sunday. On Tuesday, he was headed down with more supplies and equipment to help in recovery efforts for those in homes where the water has receded.

A Brookhaven man received a suspended sentence and a $1,000 fine and must undergo a mental health evaluation after he... read more