Principal: ‘We are truly grateful for all that they do’ 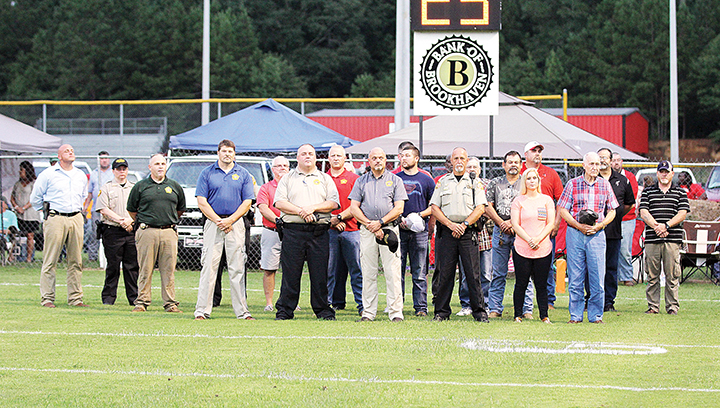 Photo by Amy Rhoads/Members of law enforcement, military and volunteer firefighters were honored Friday night at Loyd Star’s first game of the season.

While the Loyd Star Hornet band played “God Bless the U.S.A.,” the crowd at the first football game of the season showered their blessings on local aw enforcement, military and volunteer fire fighters.

Billy Vaughn, the attendance center’s assistant principal and athletic director, thought it would be a nice gesture to recognize the first responders and members of the military from the county and city at the Hornets’ first game.

Vaughn put the word out, and invited the men and women and their families to attend the Hornets’ game against the Bogue Chitto Bobcats Friday night.

“We decided we wanted to recognize them at the ballgame and thank them for everything that they do for us,” he said. “We wanted them to know that Loyd Star and Lincoln County schools appreciated their service and what they provide for us.”

The men and women were called down to the field and recognized by Lincoln County Superintendent Mickey Myers, Loyd Star Principal Robin Case and Bogue Chitto Principal Jay Rayborn.

They received a standing ovation from the crowd in the stands, Vaughn said.

Lincoln County Sheriff Steve Rushing said it was a great honor to be recognized at the game, which he attended with his son. “It’s nice to know that we’re appreciated across our county in times like these. it was real nice of them to do that.”

Case said she was glad they were able to pay tribute to the First Responders and the members of the military.

“Too often, we take for granted how blessed we are to live in a safe community,” she said. “Likewise, we fail to recognize those who have fought for our freedoms. With so much negativity being cast toward our law enforcement and military, we at Loyd Star wanted to make sure they know they are appreciated. We are truly grateful for all they do.”