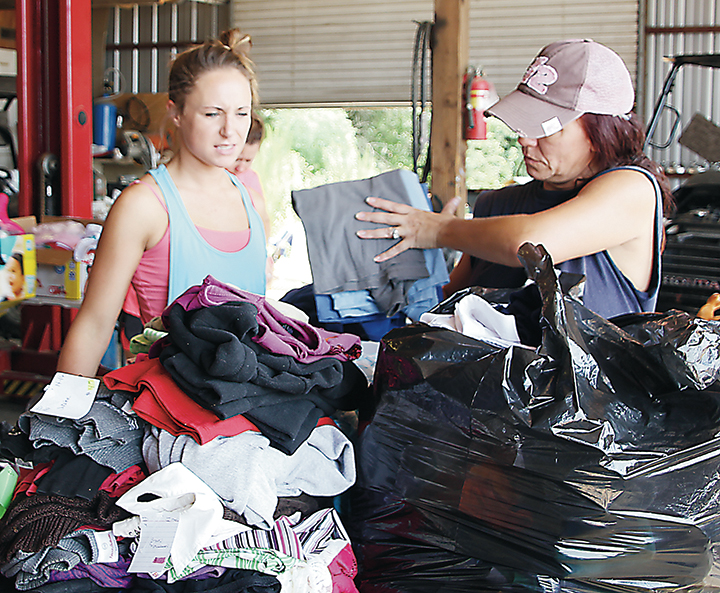 Photo by Alex Jacks/Ashley Martin (left) and Terry McCord sort through bags of clothes at RV Source Tuesday in preparation of sending a trailer of supplies to Denham Springs, Louisiana.

The outpouring of love from Lincoln County to its Louisiana neighbors is continuing.

Bogue Chitto Volunteer Firefighters held a donation drive Saturday that was so successful, they had to keep it going Sunday as well.

“We were going to do it just Saturday, but people keep coming and saying, ‘We can bring more tomorrow,’” said Shannon King, a volunteer firefighter and secretary for the department.

King suggested BCVFD take on the project after seeing a post from her friend, Ashley Martin. Martin’s husband and his family are originally from Denham Springs, though Brookhaven is home now.

Martin’s brother- and sister-in-law, Josh and Amber Martin, own RV Source on Hwy. 84. They’ve become a drop-off location for anyone who wants to send supplies to Louisiana. They’ve made at least a dozen trips since the flooding, each time carrying a full box trailer “and whatever we can cram in the vehicles,” Amber Martin said.

The fire department put the word out and people started showing up with donations. “It was just a lot of everything you could imagine they would need,” King said. “We’re very proud of Bogue Chitto people. They’ve always showed up to help. I’m happy to say I’m from Bogue Chitto.”

She said so much was collected, they had to send it to RV Source on a trailer. “It wouldn’t all fit in the back of a truck or two,” she said.

King was glad they were able to help the people in Louisiana whose homes were flooded.

“This is the first time we’ve ever had anything like this that wasn’t for the fire station, but we plan on doing other things in the future,” King said.

Amber Martin said she is overjoyed at the response she’s seen from people in Lincoln County and she’s glad to be just a small part of it.

“We’re just the feet and the hands carrying it in God’s honor to the people who need it,” she said.

She said so many individuals and groups have brought supplies to them to send to Louisiana.

Earlier this week, West Lincoln Attendance Center held a can food drive. “The kids brought over 4,000 canned good items to donate,” she said.

Because Josh and Jacob Martin are from Denham Springs, the Martins know where some of the biggest needs are. “We have lots of connections with friends and family down there,” Amber Martin said. “We’re trying to go where the needs are. I’m trying my best to get it to them as fast as I can.”

The Martins will continue to make the trip as long as there are supplies to carry.

“As long as everybody’s giving, we’re taking it down there. This has been a tremendous turnout. The people of this community is just amazing and how they come together is amazing.”

Error found could save city money

Corrections to a major error discovered by City Clerk Mike Jinks in a Brookhaven Board of Alderman work session Tuesday... read more