One killed in Hwy. 84 accident 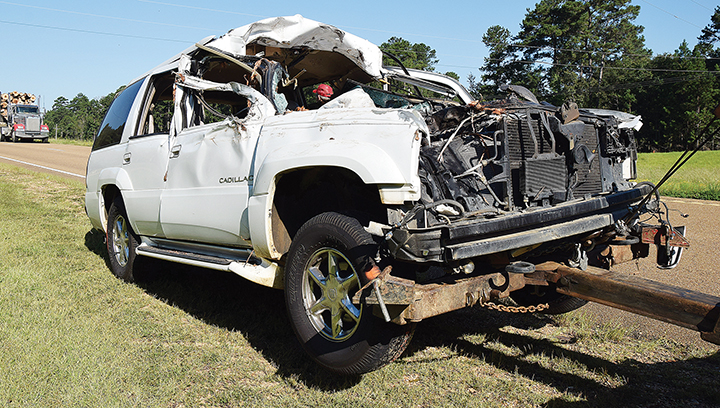 Photo by Bill Perkins/One person was killed in a traffic accident Wednesday morning on Hwy. 84 in Franklin County just west of the county line, authorities said. The crash happened in the eastbound lane and involved an SUV and alog truck, said Cpl. Brandon Fortenberry of the Mississippi Highway Patrol.

The driver of a 1999 Cadillac Escalade was killed instantly Wednesday as he was headed into Lincoln County on Hwy. 84 when he ran into the back of an 18-wheeler fully loaded with logs, authorities said.

Quincy O’Quinn, 37, of Bude, was pronounced dead on the scene, Cpl. Brandon Fortenberry with the Mississippi Highway Patrol said.

The crash occurred around 7 a.m. as O’Quinn was eastbound on Hwy. 84 in Franklin County, just slightly west of the county line.

“It was almost on the line,” Fortenberry said.

O’Quinn’s SUV crashed into the back of the loaded 1987 International log truck, driven by Rickey Adams, 57, of Meadville, he said.

“Both were traveling eastbound on 84 when the Escalade came into contact with the rear of the 18-wheeler and logs,” Fortenberry said.

“The vehicles came to a final rest on the edge of the roadway. The driver was pronounced dead at the scene.”

Adams was not injured, he said.

The crash remains under investigation by the Highway Patrol.

Man to stand trial for firing at police

An Oct. 20 trail date was set in a Wednesday hearing for a man accused of firing at a law... read more