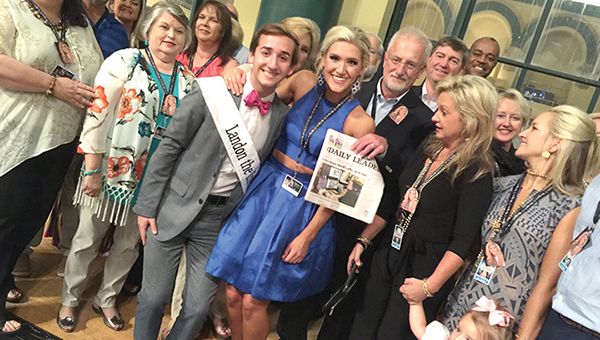 Photo submitted/Miss Mississippi Laura Lee Lewis poses with a recent edition of The Daily Leader newspaper as she’s surrounded by family and friends who made the trip to Atlantic City to watch her compete in the Miss America pageant tonight.

While a delegation of loyal Laura Lee Lewis fans clang cowbells in honor of Miss Mississippi’s alma mater tonight in Atlantic City, another group will be in downtown Brookhaven watching the action live on a big screen.

Cowbells for them will be optional.

Lewis, a Brookhaven native and a student at  Mississippi State University, will be competing in the 96th annual Miss America pageant  in New Jersey.

The pageant will be broadcast live at The Haven beginning at 8 p.m. Doors open at 6:30 p.m. with activities planned before the program, which will be shown on ABC.

Tickets are $10 for adults and $5 for children 10 and under. They can be purchased online at highway55events.ticketleap.com. Additional fees are charged for online purchases.

Tickets will also be available at the door.

The viewing party is sponsored by Highway 55 Events. Organizers Troy Douglas and Trey Waterloo wanted to offer an event for locals to gather to watch Lewis together. “It’s like a bunch of men watching the Super Bowl, but it’s a bunch of women watching a beauty pageant,” Douglas said.

The Haven can sit 300, he said, and he’s hoping the place will be packed. A portion of the ticket sales will be donated to Lewis’ platform, Mentoring Matters.

Three current statewide pageant queens will be on hand to crown future Miss America winners with tiaras and sashes, said Susan May of Susan’s Shoppe. May is helping Douglas and Waterloo organize the event.

The crown/sash package is an additional $10. Concessions will be sold at the event. 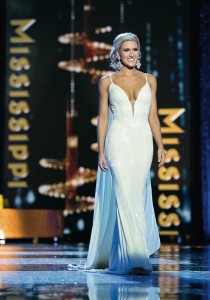 Those attending the viewing party will see a special pre-recorded message from Lewis from Atlantic City. It’s a personal message thanking Brookhaven for its support, Douglas said.

May said Douglas came to her with the idea and asked for her help.

She’s been one of Lewis’ main clothiers since seventh grade, so she changed her plans — she was headed to Atlantic City — so she could help put the viewing party together.

“It was a wonderful idea because she is our hometown hero,” she said. “It just seemed like the logical thing to do for Laura Lee and the Lewises.”

May said at least 125 people will be sitting in the LLL cheering section. Supporters have traveled to Atlantic City from all across Mississippi, but mostly from Brookhaven, she said.

“I think this is the biggest delegation that’s ever been from Mississippi,” she said. “I was planning to go but I felt like I need to stay in Brookhaven to make sure that everybody got to watch.”

May is certain Lewis will make the finals. “I just don’t see why in the world they would not pick Laura Lee to be in their top 15,” she said. “She’s the epitome of Miss America. She’s everything they’re looking for. She’s a beautiful soul.”

If Lewis doesn’t make the cut, viewers will see her wearing a gown from Susanne’s Shoppe in Brookhaven. If she’s in the finals, she won’t need the gown, May said. As much as she’d love to see one of her dresses on national TV, she’d rather see Lewis in the finals. “I’m Team Laura Lee 100 percent,” she said.

Lewis’ mother, Lorin, said the support from everyone has been tremendous. The cheering section in Atlantic City has signs and lighted sticks to go along with the cowbells. “So far, we have been one of the largest and loudest groups of supporters and LLL says it is very encouraging to see and hear that kind of support while on stage,” she said. “Sadly, there are some girls there with very little support.”

Like most Americans, Carl Aycock remembers exactly where he was when American Airlines Flight 11 flew into the north tower... read more