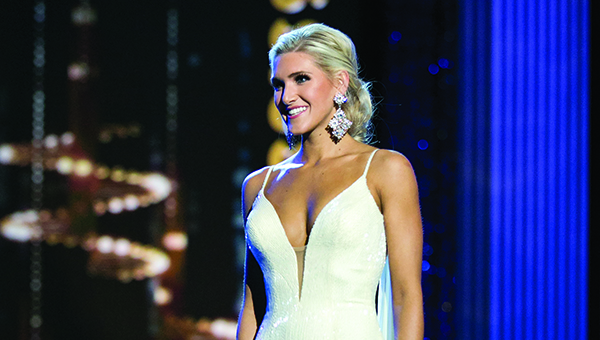 Photo by B. Vartan Boyajian/MAO

“This is just incredible,” Lewis said, just before the top 5 was announced. “This is an amazing experience.”

It was a fast-paced two-hour program, televised on ABC, from Boardwalk Hall in Atlantic City.

After the 52 contestants introduced themselves, the group was quickly cut to just 15 women.

Lewis was the 15th contestant to be called. “Saved the best for last,” said Kellye Sicks of Brookhaven, who was in the audience at Boardwalk Hall in Atlantic City.

For the swimsuit portion of the pageant, contestants showed their poise and athleticism as they paraded around the stage in bikinis and heels as judges including Olympic medalist Gabby Douglas and Dallas Mavericks owner Mark Cuban watched and took notes.

Lewis, the daughter of Mark and Lorin Lewis of Madison, formerly of Brookhaven, then competed in the evening gown portion. Her sparkly white gown, she said in a pre-taped audio, was Elsa on the top and Cinderella on the bottom. “It’s a little elegance and a little sexy sophistication,” she said.

When the top 10 were named, Lewis was in their ranks, moving on to the talent portion, which accounted for 30 percent of the score.

She nailed her version of Barbra Streisand’s “Piece of Sky,” performing the song from “Yentl” almost flawlessly.

Lewis advanced to the top 7, which had her answering an on-stage question from judge Sara Foster. The actress asked her about her thoughts concerning 1989’s Miss America Gretchen Carlson and the former Fox News anchor’s sexual harassment lawsuit against Roger Ailes, which was settled for $20 million.

Lewis said that women are still treated unfairly in the workforce. “We have so much further to go,” she said. “It’s 2016. Come on guys.”

A trooper with the Mississippi Highway Patrol who was injured Sunday afternoon on his way to a traffic accident in Bogue... read more