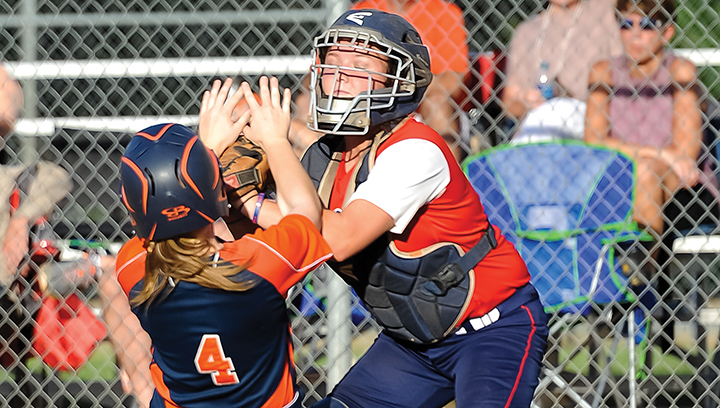 The Wayne County Lady Eagles swept a doubleheader Monday night against the Brookhaven Lady Panthers. The Lady Eagles won the first game by a score of 4-2 and the second game 11-2.

The Lady Eagles seemed to have their offense going, putting together two hits in the first inning before the Lady Panthers’ defense was able to stop them.

The Lady Panthers’ Cheyenne Motley hit a hard line drive out into the outfield to load up the bases. Rileigh Allen followed with a double to bring in the first runs of the game.

The Lady Eagles managed to get out of the first inning without allowing another run.

Wayne County was able to load the bases in the third inning, and later scored their first run on a hard hit single by Haley Clark. Still, the Lady Panthers’ defense stopped the Lady Eagles from tying up the game with a stout effort.

Wayne County gambled in the fourth inning by sending their runners on a deep fly ball to right center field. However, the Lady Panthers were able to get to get the ball to the infield quickly to prevent any runs from scoring.

Motley hit a single in the fourth inning, but the Lady Eagles were able to turn a double play to end any rally attempt. In the sixth inning with two outs, Wayne County’s Hali Harvey hit a two-run homerun. The Lady Eagles scored their final run in the seventh inning to end the game at 4-2.

Motley, with one strike out and five walks, took the loss.

With two runners on, the Eagles wasted no time scoring on a three-run homerun by Tica Watts. The Lady Panthers’ defense was able to get out of the inning before the Lady Eagles expanded their lead.

In the fourth inning, Jordan hit a two-run homerun to add to their advantage.

In the fifth inning, the Lady Eagles’ Hali Harvey hit a deep fly ball to move the base runners into scoring position and Wayne County’s Camryn Miller brought in two runs. Later, Emily Rigney would load the bases with a single. Mollie Singleterry followed that up with a walk to bring in another run for the Eagles.

A poor throw to home plate by the Lady Panthers’ defense allowed the Lady Eagles to score two more runs before the inning was over.

Allen had one walk in the start on the mound for the Panthers. Motley pitched in the second inning and picked up the loss.

Jordan got the win for the War Eagles.

The Lady Panthers’ Henderson had a homerun and double. Motley and Miller each hit a single.

“We need to hit the ball better. Wayne County is a good team. Our defense played well in game one, but we have to play all seven innings,” Lady Panthers’ head coach Mandy Vison said.

Brookhaven will head to Pearl today for a doubleheader with the Pirates at 5 p.m. The second game will begin at 6:15 p.m.

Photo by Jana Harp/Lawrence County running back Brandon Bullock looks for room in the Cougars’ first game of the season... read more