A friend of an injured Mississippi State Trooper has started a gofundme account to help him with medical expenses.

Mitchell Chappell, 27, of Brookhaven, was injured Sunday afternoon on his way to a traffic accident in Bogue Chitto. He remains stable in serious condition from his injuries at University of Mississippi Medical Center in Jackson, said Cpl. Brandon Fortenberry with the MHP. 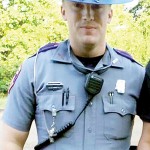 “They have been doing a series of tests and keeping a good eye on all his injuries,” he said.

Fortenberry said the trooper received “a heavy skull fracture along with other injuries.”

Zach Harveston, a communications officer with the Lincoln County Sheriff’s Office and MHP, started the account Monday with a goal of $10,000 and raised more than half in less than 24 hours. The website is gofundme.com/27chsdyc.

“We’re all connected as a law enforcement family. I feel like someone needs to stand up and promote and give back to him because he has given so much in just a year and a half to this area and South Mississippi,” he said.

Harveston hopes the money will help with medical expenses and will allow Chappell’s wife, Amanda, to spend time at the hospital, where Chappell is in the critical care unit.

He said Amanda Chappell is asking for prayers for her husband.

An account at Regions Bank will be opened today, Harveston said. It’s listed as a benefit account for Mitchell Chappell.

Fortenberry said Chappell was on I-55 at 3:48 p.m. in the northbound lane headed to the accident. He said Chappell apparently lost control of his cruiser at the 31 mile marker due to the severe weather conditions. At 4:06 p.m., dispatchers lost radio contact with him and other troopers began to try to locate him, he said.

He was found unconscious still in his restraints in the cruiser, which had collided with large thicket of trees, Fortenberry said.

The first trooper on the scene proceeded to take the injured trooper to King’s Daughters Medical Center in his cruiser.

“The third was available and responded immediately,” he said.

Culpepper said it appears the second trooper didn’t want to wait for the ambulance.

“The trooper notified dispatch that he would transport the injured trooper in his vehicle,” he said.

The ambulance was dispatched at 4:23 p.m. Their estimated time on scene was 4:40 p.m. but was cancelled at 4:32 p.m. by Lincoln County dispatch, Culpepper said.

On his way to the hospital, the trooper’s car hydroplaned, and he lost control of his cruiser about seven miles away on Hwy. 84, Fortenberry said.

After the second accident, another trooper was called and was eastbound on Hwy. 84 near Jackson-Liberty Road when he also hydroplaned because of the weather conditions, he said.

A Lincoln County deputy arrived on the scene of the second accident and took the injured trooper to KDMC, where an ambulance then transported him to UMMC.

Deputies also responded to the initial accident on I-55 near Bogue Chitto that the first trooper was headed to.

Fortenberry did not know the details of that accident.

Fortenberry said he did not know if speed was a factor in the trooper accidents. The accidents remain under investigation by the MHP.

The names of the other two troopers have not been released.

Joseph Damico, 63, was arrested by the Brookhaven Police Department Friday on charges he allegedly kidnapped a deputy with the... read more