Lewis: ‘I left one happy girl’ 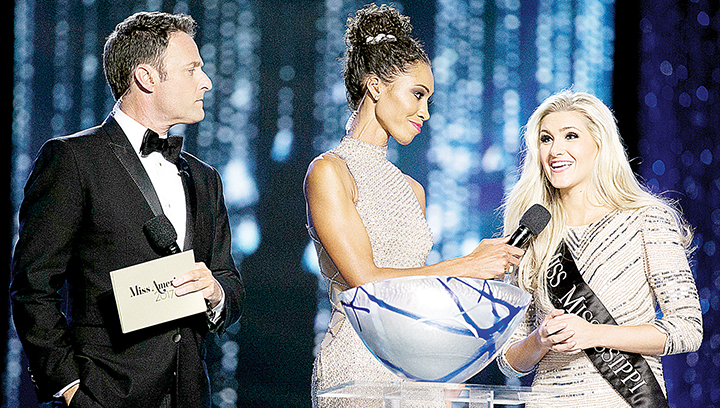 Waiting to catch a flight to Jackson Monday, Miss Mississippi Laura Lee Lewis said she had no regrets about her top five finish in the Miss America pageant.

“It’s been incredible and such a blessing,” she told The Daily Leader. “I’m so blessed for this opportunity. I have no regrets for anything I said or what I did. I’m so incredibly proud of everything.”

Lewis, 23, has an appearancescheduled on Wednesday and almost a full year to travel the state and continue her duties as Miss Mississippi.

“I’m coming home a winner regardless,” she said.

The Brookhaven native finished as fourth alternate in the Miss America 2017 pageant Sunday. She earned a $10,000 scholarship for the win.

It was a fast-paced two-hour program broadcast on ABC from Boardwalk Hall in Atlantic City, New Jersey.  After the 52 contestants introduced themselves, the group was quickly cut to just 15 women. 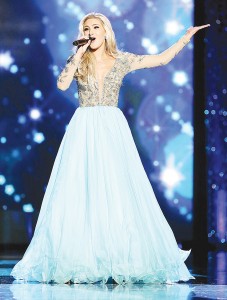 Photos by B. Bartan Boyajian/MAO/Lewis performs “Piece of Sky” during the talent portion of the Miss America pageant.

Walking out on stage for the first time, Lewis saw a large crowd of about 125 supporters from her home state holding signs that spelled out Mississippi. She couldn’t see their individual faces, but she recognized the whoops and hollers.

“I could certainly hear them,” she said.

She wasn’t nervous as the names of the finalists were called and hers wasn’t one of them.

“I came into this saying ‘It’s God’s will and God’s plan. I’m just going to focus on him,’” she said.

Fourteen names had been called and her cheering section was quiet waiting for co-host Chris Harrison to read the 15th and final name. She said she felt that if she was not on the right path, God would direct her.

For the swimsuit portion of the pageant, contestants showed their poise and athleticism as they paraded around the stage in bikinis and heels for 45 seconds each as judges, including Olympic medalist Gabby Douglas and Dallas Mavericks owner Mark Cuban, watched and took notes.

Lewis, the daughter of Mark and Lorin Lewis of Madison, formerly of Brookhaven, then competed in the evening gown portion. Her sparkly white gown, she said in a pre-taped audio, was Elsa on the top and Cinderella on the bottom.

“It’s a little elegance and a little sexy sophistication,” she said.

When the top 10 were named, Lewis remained in their ranks, moving on to the talent portion, which accounted for 30 percent of the score. She nailed her version of Barbra Streisand’s “Piece of Sky,” performing the song from “Yentl” almost flawlessly.

Her goal — besides winning the Miss America crown — was to sing on national television.

“Singing has been a part of my life for as long as I can remember, and I wanted to share that with the nation,” she said.

Her mother has been her voice coach her entire life. She told her to just enjoy the moment, and so she did.

For the on-stage question, which counted for 20 percent of the judges’ scores, only seven of the 10 remaining contestants were chosen to select a ball from a bowl with a corresponding number to a judge for their question. Lewis made it into the top seven and her randomly drawn judge was actress Sara Foster. Foster asked Lewis about a recent sexual harassment case that had been in the news.

Lewis had 20 seconds to respond.

“In that moment, I felt like I gave it everything I had,” she said.

Lewis made it into the top five, which was one of her goals. Though she didn’t bring home the crown, she’s happy with what she accomplished.

Lewis’ mother posted a message on Facebook before her daughter took the stage Sunday night.

“For the past few days we have been literally covered with hundreds of messages, calls, texts and words of encouragement for our precious daughter, Laura Lee. Mark and I are truly bursting with gratitude for all the love and support. Thank you so very, very much for your kindness,” Lorin Lewis said.

She posted Laura Lee Lewis’ last words to her before she headed to the stage to compete: “This is the time. I’m going to make happy memories and live in the moment. It is the last time I will ever compete onstage. And I am in Miss America. I am happy, and I have done my best, so I go into tonight with no regrets.

“Please pray for me to have peace, clarity, wisdom, guidance and understanding and trust in my God who loves me and knows his plans for my life. I’m staying focused. I know God has a direct path or plan for me. Whether that’s Miss America or not. I’m leaving with my head held high and eyes on him.’”

“It has been a fantastic adventure here,” Lorin Lewis said. “Miss America and Miss Mississippi. Both are wonderful blessings. It will be fun to find out what will be the next step. Thank you for loving us.”

The trial for a man charged with three counts of child exploitation was set for Oct. 3 in a Monday... read more